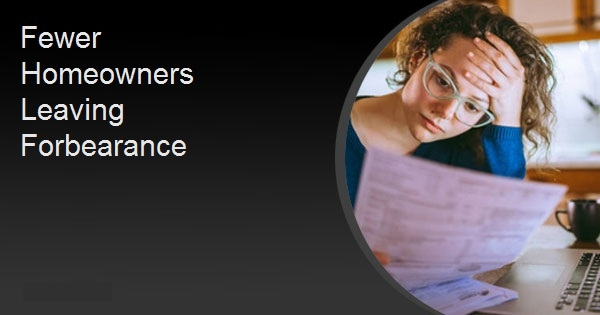 Any decline in the number of mortgages in forbearance appears to have, at least temporarily, reached a plateau. For the second straight week Black Knight's survey found little change; only 1,000 fewer mortgages were in plans during the week ended August 25 than during the previous period. The company estimates that 3.9 million homeowners continue to use the COVID-19 relief authorized by the CARES Act and slightly less than three-quarters are now in an extension of their original 90-day plans. The forbearance total represents $828 billion in unpaid principal and 7.4 percent of all mortgages being serviced, the same percentage as the previous week.

There are now about 5.3 percent of all GSE-backed loans in forbearance, numbering 1.474 million. The FHA/VA total is 1.409 million or 11.6 percent and 1.048 million or 8.1 percent of "other" loans, i.e. portfolio loans and those in private label securities (PLS) are in forbearance.

The number of GSE loans in forbearance has been declining, but those improvements have been offset by increases in FHA/VA and Portfolio/PLS portfolios.  GSE plans declined by 23,000 during the week while FHA plans increased by 10,000 and other loans by 12,000.

While recent declines have been minimal, there has been improvement. The number of total plans is down 171,000 over the last 30 days, a 4.0 percent decline. GSE loans have posted the largest decrease, 128,000 or -8 percent. More modest improvements have been seen among FHA/VA and "other" loans, down 23,000 and 20,000 plans, respectively. Each represents a -2 percent change.

Black Knight estimates that the monthly advances for principal and interest on loans in forbearance is $1.6 billion for GSE loans, $1.3 billion for FHA/VA loans, and $1.8 billion for other loans. Tax and insurance payments total $1.8 billion a month, spread nearly equally across loan types.