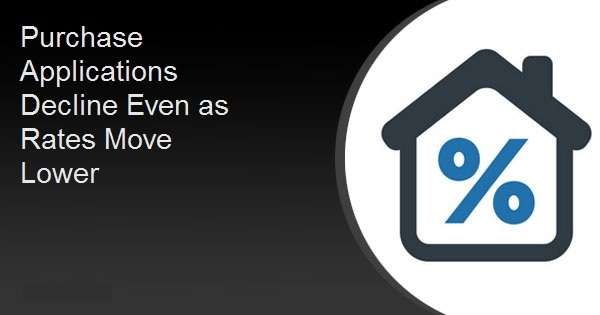 Mortgage applications volume fell for the second time during the week ended August 21, declining 6.5 percent from the previous week according to the Mortgage Bankers Association's (MBA's) seasonally adjusted Market Composite Index. The volume was down 7.0 percent before adjustment.

The Refinancing Index lost 10 percent from the previous week's level and the refinancing share of all activity declined 2 percentage points to 62.6 percent. The Index was still 34 percent higher than during the same week in 2019.

The seasonally adjusted Purchase Index eked out an 0.4 percent gain but was down 2.0 percent on an unadjusted basis. It was 33 percent higher than the same week one year ago.

"Mortgage rates were mixed last week, but the rates for 30-year fixed mortgages and 15-year fixed mortgages declined. Despite the lower rates, conventional refinance applications fell 11 percent and government refinance applications fell 6 percent, which pushed the total refinance index to its lowest weekly level since July," said Joel Kan, MBA's Associate Vice President of Economic and Industry Forecasting. "The home purchase market remains a bright spot for the overall economy. Purchase applications were essentially unchanged but were 33 percent higher than a year ago - the 14th straight week of year-over-year gains. Mortgage rates at record lows and households looking for more space are driving this summer's surge in demand."

The average contract interest rate for 30-year fixed-rate mortgages (FRM) with balances at or below the conforming limit of $510,400 decreased to 3.11 percent from 3.13 percent, with points increasing to 0.38 from 0.36. The effective rate decreased.

The rate for jumbo 30-year FRM, loans with balances exceeding the conforming limit was unchanged at 3.41 percent with 0.35 point. The effective rate was also unchanged from the prior week.

There was no change as well for 30-year FRM backed by the FHA That rate remained at 3.16 percent. Points increased to 0.29 from 0.27 but the effective rate was unchanged.

Fifteen-year FRM had a 3-basis point decline in the average rate to 2.70 percent. Points increased to 0.39 from 0.36 and the effective rate decreased.

The average contract interest rate for 5/1 adjustable rate mortgages (ARMs) jumped to 3.14 percent from 2.95 percent. Points ticked up to 0.42 from 0.41 and the effective rate increased from last week.  The ARM share of activity decreased from 2.7 to 2.6 percent of total applications.

MBA also reported that its latest Forbearance and Call Volume Survey found only a 1 basis point dip in the total number of loans in forbearance since the previous survey.  As of August 16, 7.21 percent of loans in servicer portfolios, approximately 3.6 million, were in forbearance plans.

"The share of loans in forbearance declined for the tenth week in a row, but the rate of improvement has slowed markedly. The extremely high rate of initial claims for unemployment insurance and high level of unemployment remain a concern and are indications of the challenges many households are facing," said Mike Fratantoni, MBA's Senior Vice President and Chief Economist. "While new forbearance requests remain low, particularly for Fannie Mae and Freddie Mac loans, the pace of exits from forbearance has declined for two straight weeks."

There were slightly fewer forbearance requests as a percent of servicing portfolio volume (#), down from 0.11 to 0.10 percent, but the volume of calls regarding forbearance increased from 7.9 percent to 8.7 percent.