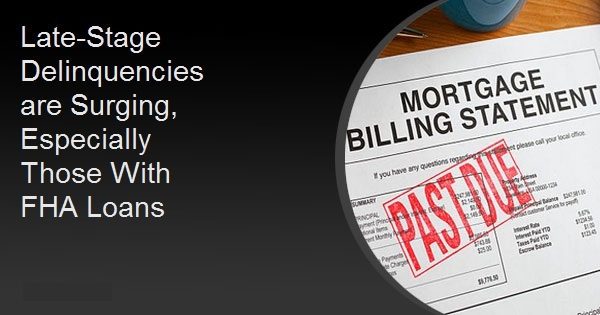 Late-Stage Delinquencies are Surging, Especially Those With FHA Loans

Like the report from Black Knight earlier today, the second quarter National Delinquency Survey from the Mortgage Bankers Association shows the effects of the COVID-19 pandemic fading a bit in early delinquency numbers but surging within the more serious non-current categories.

The overall rate of loans 30 or more days past due increased during the second quarter to a seasonally adjusted 8.22 percent of all outstanding one-to-four-unit mortgages. This was up 386 basis points (bps) from the first quarter of the year and 369 bps year-over-year. MBA includes loans in forbearance in its delinquency numbers.

Looking at delinquencies by bucket shows a slight decline, 33 bps among loans 30-days or more past due to a 2.34 percent rate, reflecting fewer loans becoming delinquent. Loans 60 to 90 days past due, however, grew 138 basis points to 2.15 percent, the highest since MBA began collecting data in 1979. Serious delinquencies, loans more than 90 days past due soared 279 basis points to 3.72 percent, the highest since the third quarter of 2010, at the height of the housing crisis.

"The COVID-19 pandemic's effects on some homeowners' ability to make their mortgage payments could not be more apparent. The nearly 4 percentage point jump in the delinquency rate was the biggest quarterly rise in the history of MBA's survey," said Marina Walsh, MBA's Vice President of Industry Analysis. "The second quarter results also mark the highest overall delinquency rate in nine years, and a survey-high delinquency rate for FHA loans."

MBA's report notes that mortgage delinquencies track closely with the availability of jobs and the largest quarterly increases in delinquency rates were New Jersey (628 bps), Nevada (600 bps), New York (575 bps), Florida (569 bps), and Hawaii (525 bps). These states all have economies that are reliant on leisure and hospitality jobs that were especially hard-hit by the COVID-19 pandemic.

"The job market has improved over the past three months, with the unemployment rate falling for the third straight month from an April peak of 14.7 percent to 10.2 percent in July." Walsh said. "This bright spot in the jobs picture is tempered by numerous uncertainties, including the ambiguous status of enhanced unemployment benefits and other stimulus measures, the recent surge in new COVID-19 cases, and the retrenchment from reopening in certain states. "And there is no way to sugarcoat a 32.9 percent drop in GDP during the second quarter. Certain homeowners, particularly those with FHA loans, will continue to be impacted by this crisis, and delinquencies are likely to stay at elevated levels for the foreseeable future."

Added Walsh, "Fortunately, there are several mitigating factors that make this current spike in mortgage delinquencies different from the Great Recession. These factors include home-price gains, several years of home equity accumulation, and the loan deferral and modification options that present alternatives to foreclosure for distressed homeowners."

The most serious categories of delinquency are not yet affected by the pandemic. The percentage of loans in the foreclosure process at the end of the second quarter was 0.68 percent, down 5 bps points from Q1 and 22 bps lower than one year ago. The percentage of loans on which foreclosure actions were started in the second quarter fell by 16 bps from the first quarter to 0.03 percent. This decline may, in part, be due to the foreclosure moratorium put in place for government-backed loans.

Longer term delinquency rates also increased for all mortgage types on both a quarterly and an annual basis. The seriously delinquent rate increased 219 bps for conventional loans, 467 bps for FHA loans, and 218 for VA loans from the previous quarter. Compared to a year ago, the increases were 184 bps for conventional loans, 453 and 217 bps for FHA and VA loans, respectively.