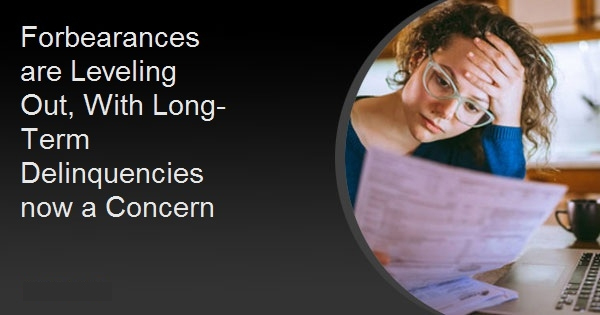 Forbearances are Leveling Out, With Long-Term Delinquencies now a Concern

The financial impacts of the COVID-19 pandemic are beginning to emerge and while it appears the crisis initially hit homeowners hard, the duration of the problem is murky. Short term delinquencies are declining, with fewer homeowners entering forbearance, while serious delinquencies are rising. We summarize the results from Black Knight's most recent weekly forbearance report and its "first look" at July loan performance below and will report on the Mortgage Bankers Associations National Delinquency Survey for the 2nd quarter later today.

Black Knight says overall delinquencies continued to improve in July, declining by 9 percent from June to a rate of 6.91 percent with 342,000 fewer loans past due. However, the delinquency rate is double that of July 2019, and 1.885 million more homeowners are 30 or more days behind in their mortgage payment than then, bringng the total to 3.692 million.  That number does not include loans in foreclosure but does include loans in formal forbearance plans.

Foreclosure activity is in suspension for government backed mortgages, so those numbers are skewed. There were 9,900 foreclosure starts during the month, up 68 percent form June, but 75 percent fewer than a year earlier. The foreclosure inventory, loans in the process of foreclosure, was down by 345,000 for the month but is 1.82 million loans larger than the previous July at a total of 3.88 million. We assume that number has increased as long term delinquencies remain in limbo.

The number of forbearance plans were relatively unchanged over the week ended August 18. The total number of GSE loans, those serviced for Fannie Mae and Freddie Mac, declined by 15,000 while FHA and loans in bank held portfolios or private label securities (PLS) increased by 5,000 and 10,000, respectively. A total of 3.9 million homeowners remain in forbearance plans, representing $833 billion in unpaid principal.

The current report puts 5.4 percent of GSE loans in plans, along with 11.6 percent of those serviced for FHA/VA and 8 percent of portfolio/PLS loans. The total number of forborne loans has dropped by 202,000 over the last 30 days with the most improvement in the GSE portfolio which is down by 130,000. The portfolio/PLS share declined by 67,000 while FHA/VA forbearances dipped a more modest 11,000 loans.

Black Knight will provide a more detailed look at loan performance in its next Mortgage Monitor. It will be published on September 8.