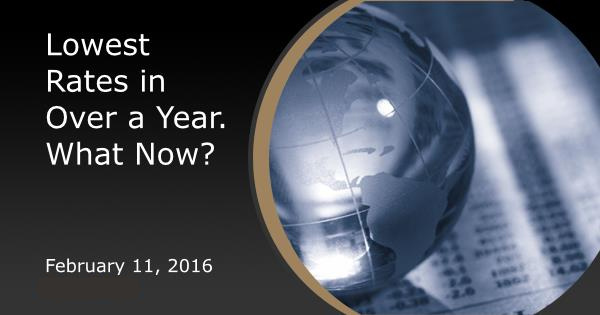 Lowest Rates in Over a Year. What Now?

Without question, 2016 continues to be one of the wildest rides in recent memory for financial markets.  This hasn’t been good for 401k balances, but it has been great for mortgage rates.  The average 30yr fixed rate quote is now back to the lowest levels in more than a year.

The fact that rates have moved lower so quickly despite the Fed hiking its policy rate in December has created a fair amount of confusion and questions.  Let’s take a moment to break down why we are where we are, what’s important to whom, and where we might be going from here.

There are several ways we can justify the current levels in stocks and bonds.  Before we do that, we have to remember that mortgage rates are not directly tied to the Fed Funds Rate (read more about that here).  While it’s true that mortgage rates do tend to generally follow the Fed rate eventually, we must also consider that markets have quickly changed their expectations about Fed hikes.  At the beginning of the year, traders saw the Fed moving up to 1.0% by December 2016.  Now they see NO hikes until mid 2017.

More important to rates is the global economic picture, or rather, what the global economic picture has done for the bond markets that underlie mortgage rate movement.  One of the most basic examples of the big picture fear is the stock market.  Simply put, investors are worried that we’re entering the same sort of downtrend seen after the last two economic cycles.  Both of those lasted almost exactly 7.5 years.  If this trend were to match the previous trends in intensity, we’ve only just begun to see stock market weakness. 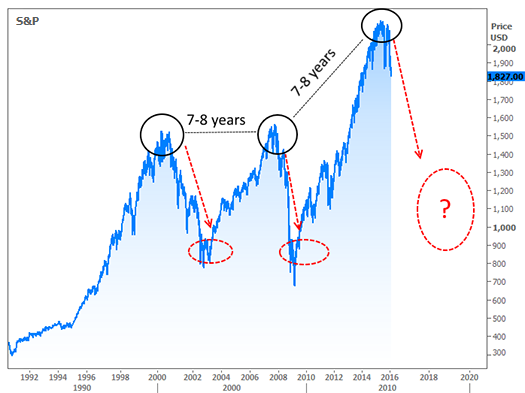 But the world is more complicated than that. It’s not just about the US stock market any more. The dramatic drop in oil prices and foreign stock markets makes the move in the US look tame by comparison. This chart shows the percent change from the end of 2015 in various market indicators. As you can see, 10yr Treasuries (a good up-to-the-minute proxy for mortgage rates) are moving at a leisurely pace by comparison. 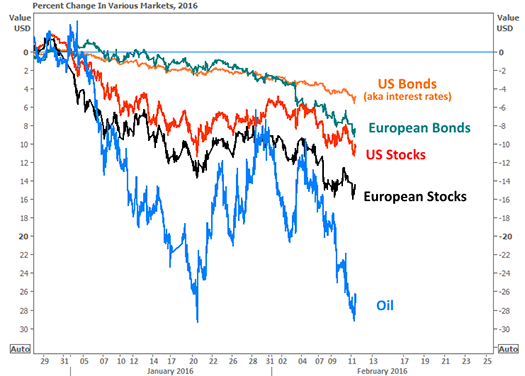 In the chart above, you might also have noticed that European markets have been doing worse into the beginning of February.  This has increasingly contributed to the uncanny drop in US interest rates because the bond markets that drive interest rates act as a safe haven for investors pulling money out of riskier assets.  If you understand the idea of re-allocating a 401k to “more bonds, less stocks,” that’s all that’s really going on here, but on a massive, global scale.

So how long will this last and how should you play it?  First of all, there is no way to know where rates will go!  (Remember, predicting rising rates is a very dangerous game.)  The proverbial “falling knife” is a good analogy.  As rates fall, we’re increasingly tempted to lock and move forward.  But locking too soon only to see rates continue to fall is like trying to catch the falling knife before it has hit the ground.  You might time it perfectly or you might get nicked up a bit.

The most rational way to look at the situation is to say that the lower the knife is, the less painful it will be if you happen to misjudge the catch.  With rates now only slightly higher than 2012-2013’s all-time lows, there’s less and less potential regret.  Just be aware that seemingly big bounces are possible—guaranteed, actually--even if the longer term trend continues lower.

That’s why it’s important to make a game-plan with a mortgage professional who keeps their finger on the pulse of the minute-to-minute changes.  Know how much you’re willing to see rates rise before locking or know what your target for improvement will be without getting greedy about further gains.  Either way, make sure the parties involved are on the same page about what to do and when to do it.

Housing-specific news was light this week.  The most notable report was Fannie Mae’s National Housing Survey that indicated a decline in consumer sentiment on housing.  Keep in mind though that the data doesn’t quite keep up with the recent market changes and there’s a good chance that the lower rates will help things improve.  That was certainly true for the MBA’s refinance index which surged last week and will likely surge again this week!