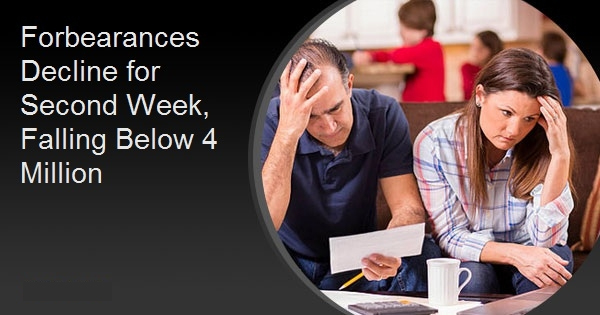 Two entities, Black Knight and the Mortgage Bankers Association (MBA) have been tracking loans in forbearance plans since the start of the pandemic. They have diverged a bit in their numbers over the last half year, but both agree, in their most recent reports, that there are now fewer than 4 million borrowers in plans.

MBA, in their report earlier this week, said there were 3.7 million loan in forbearance, or 7.67 percent of all loans in servicer portfolios. On Friday Black Knight's report put the number of 3.9 million, or 7.4 percent of the estimated 54 million loans being serviced. About 73 percent of those loans are in extensions of their initial 90-day plan.

Black Knight says the current tally is down by 71,000 from the previous week and represents $852 billion in unpaid principal. There had been around 4.75 million loans in forbearance plans in mid-May.

About 5.4 percent of all GSE-backed (Fannie Mae and Freddie Mac) loans and 11.5 percent of FHA/VA loans are currently in forbearance plans along with 7.9 percent of loans in private label securities (PLS) or banks' portfolios. All of those investor classes saw their numbers shrink over the past week, the largest change was among portfolio-held/PLS loans which dropped by 36,000 loans or 0.3 percent. GSE loans in forbearance declined by 18,000 (-1 percent) and FHA/VA loans had their second weekly decline - albeit a modest one - falling by 8,000, also -1 percent.

While the burden of making advances of principal and interest (P&I) to investors has largely shifted from servicers to the GSEs themselves due to the four month cap put on the servicer obligation, there is still a requirement that someone advance $1.7 billion per month. There was no cap put on tax and insurance (T&I) payments so servicers have an estimated $0.7 billion monthly bill. Servicers of FHA and VA loans must make monthly P&I payments of $1.3 billion and $0.5 billion in T&I. Servicers of other loans may have requirements of as much as $1.7 billion and $0.6 billion, respectively.

Black Knight says the ongoing COVID-19 pandemic around much of the country and the expiration of expanded unemployment benefits last month continue to represent significant uncertainty for the weeks ahead.