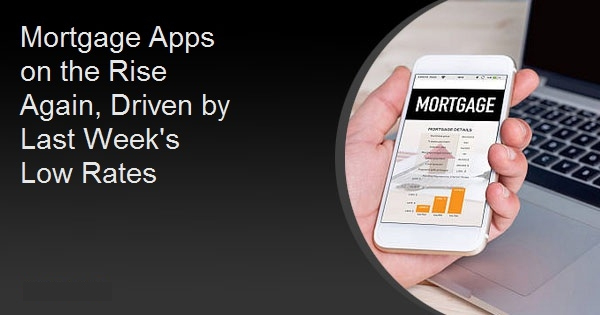 The Refinance Index jumped by 9 percent compared to the previous week and was 47 percent higher than the same week one year ago. Applications for refinancing accounted for 65.7 percent of the total, up from 63.9 percent the previous week.

The seasonally adjusted Purchase Index gained 2 percent from one week earlier and rose 1 percent before adjustment. Purchase mortgage activity was 22 percent higher than the same week one year ago.

Joel Kan, MBA's Associate Vice President of Economic and Industry Forecasting said, "Mortgage rates fell across the board last week, as investors grew less optimistic of the economic rebound given the resurgence of virus cases. Loan types such as the 30-year fixed, 15-year fixed, and jumbo all reached survey lows. Refi activity responded to these lower rates, with the refi share reaching almost 66 percent of all applications, its highest level since May. And the refi index jumped 9 percent, reaching its highest level since April, as both conventional and government applications for refinances increased. Home purchase activity continued its strong run with a 2 percent increase over the week and was up around 22 percent compared to the same week a year ago. While this was still positive news for the purchase market, the gradual slowdown in the improvement in the job market and tight housing inventory remain a concern for the coming months, even as low mortgage rates continue to provide support."

Average contract interest rates declined for all loan products relative to the prior week and effective rates were lower for those with fixed rates. The rate for 30-year fixed-rate mortgages (FRM) with conforming loan balances at or below the conforming loan limit of $510,400 decreased to 3.06 percent from 3.14 percent. Points fell to 0.33 from 0.39.

Jumbo 30-year FRM, loans with balances greater than the conforming limit had an average rate of 3.40 percent with 0.31 point. The previous week the rate was 3.51 percent with 0.33 point.

Thirty-year FRM with FHA backing had an average rate of 3.23 percent, down 4 basis points from the prior week. Points fell to 0.33 from 0.42.

While the rate for 5/1 adjustable rate mortgages (ARMs) declined 9 basis points to 3.00 percent, points jumped to 0.30 from -0.03, driving the effective rate higher. The ARM share of activity decreased to 2.7 percent of total applications from 3.1 percent.

MBA's latest Forbearance and Call Volume Survey showed the total number of loans now in forbearance decreased by 23 basis points from 7.67 percent of servicers' portfolio volume in the prior week to 7.44 percent as of August 2, 2020. This would indicate that 3.7 million homeowners are in forbearance plans. Loans in the initial stage of forbearance accounted for 40.87 of the total and 58.43 percent are in a forbearance extension. The remaining 0.70 percent are forbearance re-entries.

The share of Fannie Mae and Freddie Mac loans in forbearance dropped for the ninth week in a row to 5.19 percent - a 22-basis-point improvement. Those serviced for Ginnie Mae (FHA and VA loans) had a forbearance rate of 10.06 percent, down from 10.28 percent, and the forbearance share for portfolio loans and private-label securities (PLS) decreased by 25 basis points to 10.12 percent. Independent mortgage bank servicers - at 7.71 percent - surpassed depository servicers (7.63 percent) for the highest share of loans in forbearance.

Added Fratantoni, "The job market data in July came in better than expected. However, the unemployment rate is still quite high, and the elevated level of layoffs and slowing pace of hiring will make it more difficult for borrowers to get back on track - particularly if there is not an extension of relief."