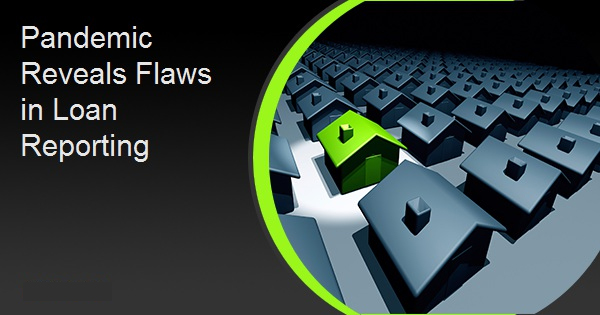 New research by dv01, a loan data agent (LDA) providing securitization reporting and analytics on consumer unsecured, mortgage, small business, and student loans, says the pandemic has revealed serious weaknesses in the reporting structure for mortgages. The company found significant numbers of unreported loan modifications and says it was these types of reporting errors during the global financial crisis (GFC) which led to an increase in price volatility when those errors were later corrected.

A new white paper says that, in stark contrast to the GFC, consumer loan performance across asset classes has remained relatively strong. Dv01 has released bi-weekly reports of both loan performance and the relief efforts by issuers and servicers to aid borrowers but has found significant irregularities and inconsistencies across the multiple parties involved in the mortgage process. Even four months into the pandemic there are numerous cases of underreported or entirely omitted modification behavior. Data report quality varies across deals and even between reporting parties within a single deal and there appear to be significant differences between online lending and that of the mortgage industry.

In online lending, issuers primarily service loans in-house and service only its own loans. By its nature online lending is technology driven and the data has fewer intermediaries. In contrast, in mortgage lending issuers and servicers are entirely different entities, so the relationships can be misaligned in terms of investor transparency. Furthermore, servicers generally handing loan portfolios from a multitude of issuers and loan types, thus issuers have less ability to control servicer reporting standards. Additionally, there can be multiple servicers per securitization, each with a different approach to reporting and capturing modifications.

In every securitization, trustees are the ultimate fiduciary and aggregate data from every party involved to create investor reports. There may also be a master servicer that aggregates data in multi-serviced deals, who reports to the trustee and reporting among trustees has been equally inconsistent. There are also third-party data providers that are not directly part of a securitization but communicate with all these entities individually. Thus, there are multiple opportunities for errors or inconsistency in reporting and data quality. Dv01 says, to date it has not observed these communication chains yield cleansed, validated, consistent, and standardized reporting for investors and stakeholders. Even more concerning, because they were so prominent in non-agency securitizations after the GFC, most of these entities may have been reporting or underreporting modifications for over a decade.

The company says that in its review of the initial months of COVID-19 performance across mortgages, they noted low levels of modification or hardship relief in both the standard reporting data from raw data providers and various trustee reports. This seemed at odds with the modifications and relief efforts in online lending markets and those available to GSE borrowers with the same servicers. There were also substantial differences in new modifications between securitizations and within a securitization with different servicers. Even within a particular deal, they observed similar variances across servicers. There was also behavior indicating modifications were occurring but were not properly reported, such as one deal with no modifications reported but with loans where balances were increasing each month.

The irregularities prompted dv01 to look at a single securitization from a prominent non-QM issuer. It engaged four individual servicers, the master servicer, and the trustee to reconcile discrepancies in the July 2020 distribution.

Out of more than 900 active loans, dv01 confirmed that 233 are in some form of active modification, representing nearly 30 percent of the outstanding collateral based on outstanding balances. The trustee reported only 41 modified loans and the Master Servicer reported 74. A supplement provided by the trustee lists 261 loan IDs that are impacted by COVID-19 but makes no distinction as to whether these loans have been modified, or if the borrower has simply indicated hardship. In some instances, counterparties are treating a small population of either completed or cancelled modifications in different ways, resulting in slightly overstated counts.

When consulting other third-party providers, the results are even more troubling. One counterparty reported a single modification as of July's distribution date. Dv01 observed significant discrepancies between each reporting party in this chain, as well as some inconsistencies across multiple data sources within a single counterparty, resulting in an understatement of over 150 loans that should be classified as active modifications.

The research indicates that this inconsistency increases investor uncertainty and delays sector recovery. Given the differences between those loans with modifications and those with borrowers who simply fall delinquent, it is apparent that modifications indicate a borrower's successful effort to avoid defaulting. Furthermore, clear modification activity allows stakeholders to reconcile servicer advance behavior and ultimately determine cash collection and distribution activity, as well as potential losses or interruptions related to repaying advances. Lastly, when the remaining reporting platforms eventually properly incorporate these factors and correct the inaccuracies, the impacted securitizations will have substantial moves in pricing and volatility, and the movement will magnify the longer the errors remain outstanding.

Dv01 concludes that the current mortgage reporting architecture is fragmented, outdated, and inefficient, and COVID-19 is further exposing the faulty reporting system. For investors to gain confidence in the health of the mortgage market and the broader economy, the industry needs a more modern and innovative approach to reporting modifications. This will involve alignment, advocacy, and accountability across all industry participants, and an entity overseeing and coordinating these efforts in every securitization.