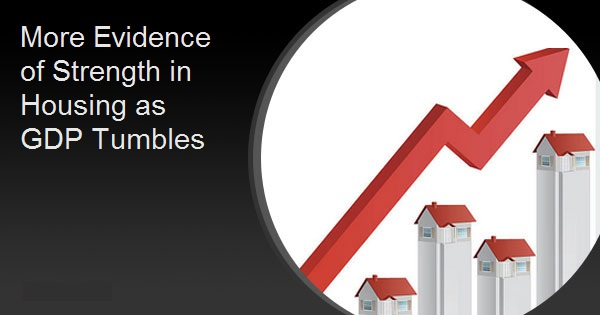 More Evidence of Strength in Housing as GDP Tumbles

The National Home Builders Association (NHBA) has been saying since the COVID-19 virus first began to ravage the economy, that it might be housing that would drive the eventual recovery. Now they have some real evidence.

The record setting 32.9 percent second quarter decline in the gross domestic product (GDP) revealed on Thursday had at least one bright spot. NAHB's chief economist Robert Dietz says the share of residential related economic activity reached its highest mark since the third quarter of 2007, increasing to 16.2 percent during the otherwise dismal quarter. Part of the reason for the growing share, of course, was the weakness of other sectors, and the residential fixed investment share held at 3.3 percent of GDP. Housing contributes to GDP in two basic ways. The first, residential fixed investment (RFI), is the measure of the home building, multifamily development, and remodeling contributions to the economy. It includes construction of new single-family and multifamily structures, residential remodeling, production of manufactured homes and brokers' fees. The second is the measure of housing services, which includes gross rents (including utilities) paid by renters, and owners' imputed rent (an estimate of how much it would cost to rent owner-occupied units) and utility payments. Imputed rent is necessary from a national income accounting approach, because without this measure, any increase in homeownership would lower GDP.

Dietz says that the RFI has historically averaged roughly 5 percent of GDP and housing services 12 to 13 percent, for a combined average 17 to 18 percent share. This tends to vary over the business cycle, however it lagged during the post-Great Recession period due to underbuilding, particularly for the single-family sector.

Housing gains will continue as the consequences of the virus crisis are likely to lead to a reversal for declining tends in home size and a greater need for additional home office space, Dietz says.  This, along with low mortgage rates, and lack of for-sale inventory will give home building and remodeling a demand-side potential. Given the widespread impact that construction has on the economy in terms of jobs and state and local tax revenue, "housing will lead the economic recovery."