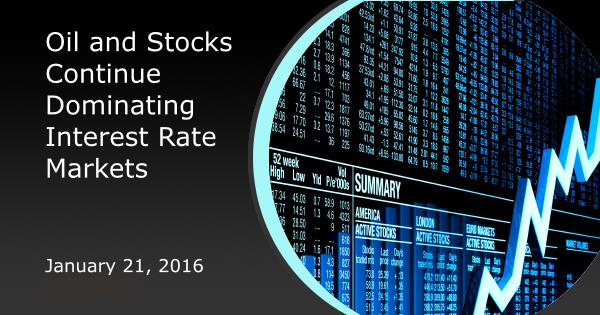 The big story of 2016 continues to be the heavy losses in risk markets and the resulting improvements in safer haven markets.  A risk market is anything with a greater risk of loss in exchange for a greater potential for reward.  Stocks are the quintessential risk market, but oil prices have been even more volatile of late.

Volatility and falling prices force investors to seek assets with more stable prices—potentially even rising prices.  Although there have been times over the past few years that have challenged the notion, US Treasuries and similar bonds are the quintessential safe havens.  This includes the mortgage-backed-securities that drive mortgage rates.

Bonds are attractive at times like this because their typical range of volatility is much smaller than that of the aforementioned risk markets.  The following chart shows the absolute percent change from the beginning of the year in stocks, oil, and 10yr Treasuries (a proxy for mortgage rates that lets us see more intraday activity). 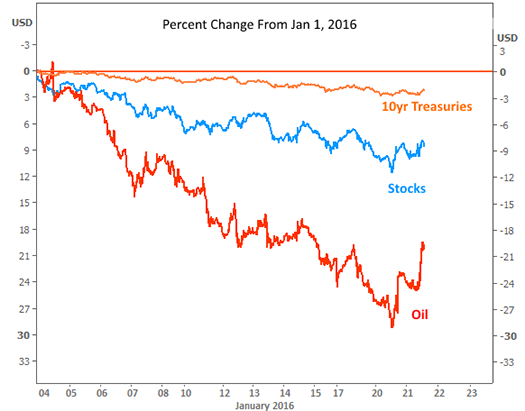 As you can see, Treasuries haven’t even moved 3 percent so far this year.  Meanwhile stocks were down roughly four times as much and oil nearly 10 times as much!

While there’s no guarantee that rates will follow risk markets, when the losses are that big, they almost always do.  2016 is no exception.  This chart shows how the 10yr Treasury yield has moved in relation to stock and oil prices so far this year: 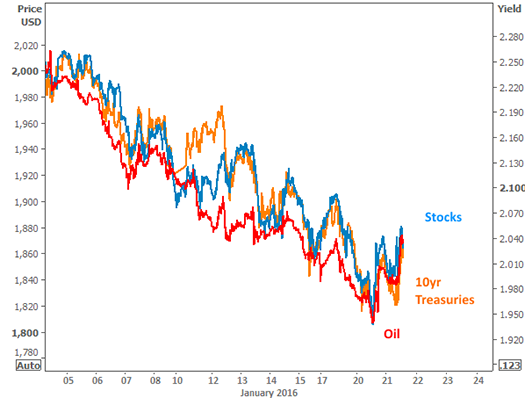 Long story short, the bumpy ride in stocks and oil has absolutely been pushing investors into the bond market.  As demand for bonds increases, rates fall.  In fact, mortgage rates hit their lowest levels in more than 2 months this week, and are fairly close to 7-month lows.  There’s no telling how long the trend will last, and we’ll only know it’s over with the benefit of hindsight.  History suggests that could happen as soon as “immediately” or it could continue for months and months.

The surge toward lower rates has anecdotally helped the housing market.  The Mortgage Bankers Association reported a sharp increase in refinance applications this week, and National Association of Homebuilders Housing Market Index continued to hold at 60 or above for the 8th straight month. 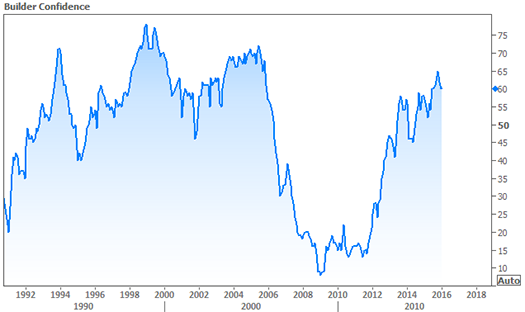 It remains to be seen whether rates will have much of an impact on construction numbers.   Although slightly lower than estimates, December Housing Starts remained in the higher end of their 2015 range.

CoreLogic opined on the silver lining surround TRID issues in the company’s Insights Blog, as well as the geographical considerations of affordability.