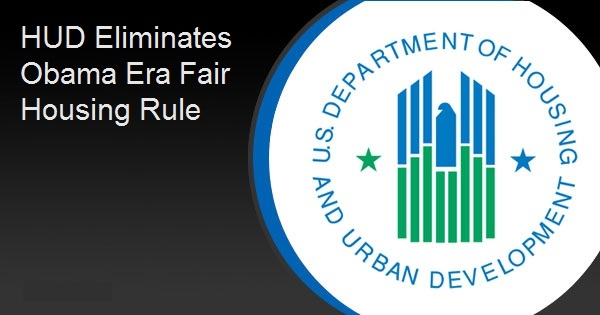 It had been threatened from the beginning of the Trump administration, but this week the hammer fell. U.S. Department of Housing and Urban Development (HUD) Secretary Ben Carson has announced the formal termination of the Obama Administration's Affirmatively Furthering Fair Housing (AFFH) regulation issued in 2015. In a press release Carson called the regulation "complicated, costly, and ineffective."

Under the rule, any community receiving HUD money was required to analyze its housing occupancy by race, disability, familial status, economic status, English proficiency, and other categories and analyze any factors that present barriers to housing. It then must then formulate a plan to eliminate those barriers which must be approved or disapproved by HUD. This must be done every five years at both a local and regional level. Federal funds could be withheld from any jurisdiction that didn't make sufficient effort to comply.

HUD had been nibbling away at the regulation for several years. In January 2018 it suspended the regulation's 92 question grading tool and announced it was suspending local government's obligation to comply with the rule until late 2020. In January of this year the agency published a substitute regulation called "Preserving Community and Neighborhood Choice" and invited public comment.  According to the National Fair Housing Alliance (NFHA), 19,500 comments were submitted.

HUD says the new rule defines fair housing broadly to mean housing that, among other attributes, is affordable, safe, decent, free of unlawful discrimination, and accessible under civil rights laws. It then defines "affirmatively furthering fair housing" to mean any action rationally related to promoting any of the above attributes of fair housing.  Now, a grantee's certification that it has affirmatively furthered fair housing would be deemed sufficient if it proposes to take any action above what is required by statute related to promoting any of the attributes of fair housing. HUD remains able to terminate funding if it discovers, after investigation made pursuant to complaint or by its own volition, that a jurisdiction has not adhered to its commitment to AFFH.

In his statement this week Carson said, "After reviewing thousands of comments on the AFFH, we found it to be unworkable and ultimately a waste of time for localities to comply with, too often resulting in funds being steered away from communities that need them most. Instead, the Trump Administration has established programs like Opportunity Zones that are driving billions of dollars of capital into underserved communities where affordable housing exists, but opportunity does not. Programs like this shift the burden away from communities so they are not forced to comply with complicated regulations that require hundreds of pages of reporting and instead allow communities to focus more of their time working with Opportunity Zone partners to revitalize their communities so upward mobility, improved housing, and home ownership is within reach for more people. Washington has no business dictating what is best to meet your local community's unique needs."

At the time the new regulation was released, Lisa Rice, president of NFHA said, "What HUD has released is not a rule to affirmatively further fair housing. It significantly weakens fair housing compliance, entrenches segregated housing patterns, and continues the status quo in which some communities are strengthened by taxpayer-supported programs and amenities while other neighborhoods are starved and deprived of opportunities. Segregation did not happen on its own; it was orchestrated by jurisdictions, government, PHAs, and private actors.  Our nation has expended an incredible amount of resources creating the disparities that plague our communities. This proposed rule is the antithesis of what we need, which are resources, commitment, resolve, and a strong rule to promote fair housing."