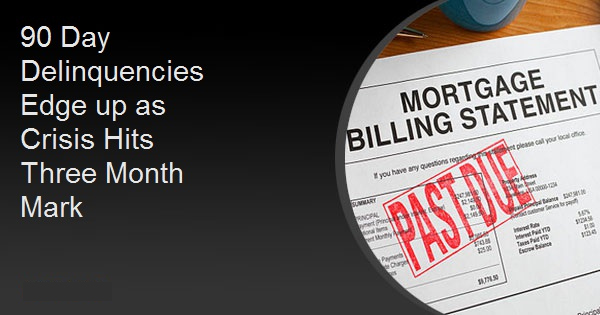 While serious delinquencies felt the first impact from the COVID-19 pandemic in June, overall delinquencies were actually lower. Black Knight's "first look" at loan performance during the month shows the national delinquency rate, which rose more than 4 percentage points in May to 7.8 percent, edged down to 7.6 percent last month. The 89,000-loan decline (2.3 percent) was the first improvement in five months. The 4.03 million mortgages that were 30 or more days past due but not in foreclosure still represented a 103.6 percent increase from a year earlier. Black Knight includes loans in forbearance plans in their delinquency numbers.

As the initial wave of borrowers financially impacted by the crisis missed their third mortgage payment, serious delinquencies, loans 90 or more days in arrears, soared. Their numbers were up 1.24 million to a total of 1.87 million, the highest number since early 2011.

With foreclosure moratoria in place, the foreclosure inventory, loans in process of foreclosure, were down by 8,000 to 192,000, the lowest in records dating back to 2000. Foreclosure starts increased 15.7 percent compared to May, but they were still extraordinarily low at 5,900 and down 85.3 percent year-over-year.

The non-current loan rate was highest in Mississippi at 12.5 percent, followed by Louisiana, New York, and New Jersey. Hawaii is now also among the top five states. Its non-current rate has deteriorated by 184 percent over the last six months.

The prepayment rate in June was 2.7 percent, the highest level in 16 years, fueled by record low mortgage rates and surging refinance incentives. This is a monthly increase of 15.9 percent and up 134.0 percent from a year ago.

Black Knight will present more in-depth information on June loan performance in its next Mortgage Monitor. It will be released on August 3.