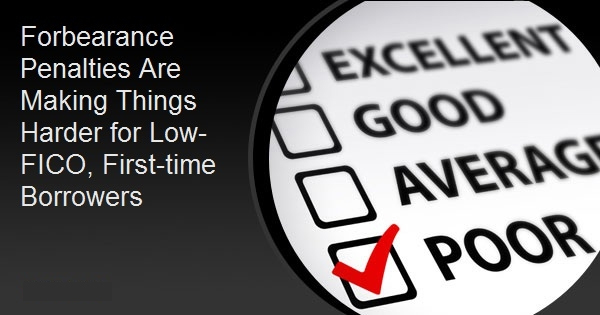 The Urban Institute (UI) is speculating that a new penalty imposed on loan originators and arising out of the COVID-19 forbearance plans is beginning to significantly tighten the credit box. A paper written by analysts Laurie Goodman and Michael Neal says that mortgages are considerably more difficult to get than they were four months ago, and this is disproportionally affecting first-time, Black, and Hispanic homebuyers.

The Federal Housing Administration (FHA) and the GSEs Fannie Mae and Freddie Mac have all imposed a penalty on lenders whose loans go into forbearance before they are delivered to Ginnie Mae, the agency that securitizes FHA and VA loans, or the GSEs. Ginnie Mae and the GSEs insure or guarantee more than 70 percent of the outstanding mortgages in the United States.

Fannie Mae and Freddie Mac now place an additional delivery fee of 5 percent for first-time homebuyers and 7 percent for all other purchase borrowers and rate-and-term refinances. Cash-out refinances that are in forbearance are not saleable at all. The FHA requires its servicers to absorb 20 percent of the eventual loss if the loan misses two payments in the first two years.

Goodman and Neal say credit has tightened appreciably during the COVID-19 crisis.  The Mortgage Bankers Association's (MBA's) Mortgage Credit Availability Index shows an 18.4 percent tightening in Ginnie Mae loans and a 16.7 percent tightening in GSE loans between March and June 2020. Other data shows that credit tightened for mortgages originated by any government-related entity between January 2019 and January 2020, and it tightened further from January to May 2020.

Credit access tightened by at least 45 percent across all three channels among borrowers with low FICO scores and high debt-to-income ratios seeking to refinance their mortgages between January and May. This is important because refinancing data is more recent than that for purchase loans which take two months longer to show up in the securitization reports. For example, the June 2020 securities reports have information about April 2020 refinance loans and February 2020 purchase loans. Thus, refinance data may offer insight into what the data on purchase loans will look like in another two months.

Servicing issues were also causing lenders, particularly nonbank originators with limited liquidity, to tighten lending to avoid cash-flow problems earlier this year, but this problem was greatly diminished when the GSEs limited servicer advances of principal and interest to investors and Ginnie Mae's put into effect its PassThrough Assistance Program. The refinancing wave also gave servicers the use of those funds for a few weeks.

The authors say their conversations with servicers indicate the threat of the new penalty is contributing significantly to recent tightening. Because they will pay this penalty on any loan that goes into forbearance before sale, they are filtering out potential problems by reducing the time between loan closing and sale and imposing overlays on top of their traditional credit box.  UI estimates the filters added to the underwriting process to weed out potential problematic loans will result in a minimum of 1 percent fewer purchase loans and 5 percent fewer refinance loans. Applying these estimates to publicly available industry forecasts for 2020 originations implies that the new penalties will limit homeownership and refinancing opportunities for approximately 255,000 creditworthy borrowers.

The data reveal that a small share of loans goes into forbearance before being sold to the FHA or the GSEs. Because of slight differences in reporting, the authors focused their analysis on Fannie Mae loans.

Three percent of loans issued between December 2019 and June 2020 are in forbearance with a considerably higher rate for those with higher coupons. The numbers in Table 1 include loans purchased in forbearance and those that have gone into forbearance since being securitized and sold to investors. The size of the loans going into forbearance are larger than the average loan size: $307,000 versus $276,000. Loans made in May and June have much lower forbearance rates than the overall rate, at 0.3 percent and 0.003 percent, respectively. The most recent loans have lower forbearance rates because most borrowers would be in the same employment situation within a month of qualifying for the mortgage as they were when the mortgage was originated. In contrast, the longer the loan is outstanding, the greater the likelihood of a changed circumstance.

The maximum income the government could derive from imposing the forbearance penalty is $53.4 million. Given the GSE 2019 profits of $23.4 billion, and Ginnie Mae's $1.7 billion annual contribution to the US Treasury, the authors say it makes no sense to prevent over 200,000 creditworthy homeowners and homebuyers from accessing homeownership or lower mortgage rates.

For the GSEs, the authors estimate penalty income at a maximum of $48 million, assuming (1) the average penalty is 6.5 points, (2) the GSEs buy 6 million loans this year, (3) the average loan size of a forborne loan is $307,000, and (4) 0.04 percent of them are in forbearance at purchase. Under these assumptions, the GSEs would be purchasing 2,400 forborne loans.

Without data on the frequency of FHA loans that would be subject to the penalty, the authors extrapolated a maximum of $5.4 million for 1,350 early forbearing loans. This is based on an MBA number showing a Ginnie Mae forbearance rate 1.9 times that of GSE loans. The authors assume: FHA loans are 2.25 times more likely than GSE loans to experience forbearance before a sale for a presale forbearance rate of 0.0009 percent. With over 1.5 million loans of an average size of $250,000, 1,350 loans would be affected. If 20 percent of these borrowers miss two payments and the loss severity is 40 percent, and servicers pay 20 percent of this, it would suggest a predicted penalty income of $5.4 million.

They conclude it is significantly harder for borrowers with less-than-pristine credit to qualify for a mortgage today than it was just four months ago.  Affected borrowers include current homeowners who want to refinance their mortgage to take advantage of record-low mortgages rates or tap into home equity to help carry them through the COVID-19 crisis. These families could also be renters who have assembled the resources to buy a home and are among the 89 percent of Americans who are still employed. The tightened credit atmosphere means these renters cannot move into homeownership to free up rental space for others and lock in monthly housing costs at a time of increasing and widespread financial insecurity.

Goodman and Neal conclude that the downsides of the penalties outweigh the financial benefits and eliminating them for selling loans made in good faith that subsequently go into forbearance before sale to the FHA or the GSEs would open access to credit for as many as 255,000 borrowers at a low cost. To eliminate the potential for abuse, the penalty could be eliminated only for loans sold no more than one month after closing.