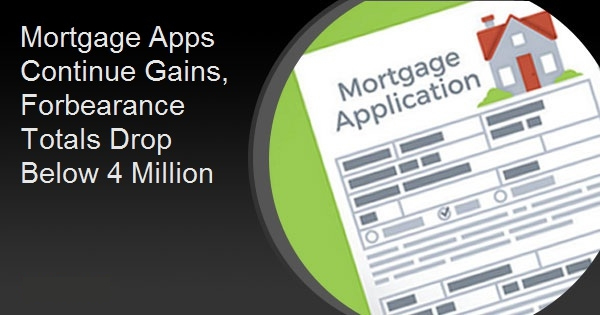 Even with some interest rates ticking higher, both purchase and refinance activity increased last week. The Mortgage Bankers Association (MBA) said its Market Composite Index, a measure of mortgage loan application volume, increased 4.1 percent on a seasonally adjusted basis from one week earlier and was up 4.0 percent unadjusted. It was the third consecutive week of gains.

Refinancing put in the stronger performance, that index increased 5 percent from the previous week and was 122 percent higher than the same week in 2019. The refinance share of mortgage activity rose to 64.8 percent of total applications from 64.2 percent the previous week.

The Purchase Index was up 2.0 percent on both an adjusted and unadjusted basis. It was 19 percent higher  year-over-year.

"Mortgage applications increased last week despite mixed results from the various rates tracked in MBA's survey. The average 30-year fixed rate mortgage rose slightly to 3.20 percent, but some creditworthy borrowers are being offered rates even below 3 percent. As a result, these low rates drove a 5 percent weekly gain in refinances and a robust 122 percent increase from a year ago," said Joel Kan, MBA's Associate Vice President of Economic and Industry Forecasting. "There continues to be strong homebuyer demand this summer, as home shoppers have returned to the market in many states. Purchase activity increased again last week and was up 19 percent compared to last year - the ninth straight week of year-over-year increases."

The average contract interest rate for 30-year fixed-rate mortgages (FRM) with conforming loan balances of $510,400 or less increased to 3.20 percent from 3.19 percent, with points increasing to 0.35 from 0.33.  The effective rate also increased.

The rate for 30-year fixed-rate mortgages backed by the FHA decreased to 3.13 percent from 3.24 percent, with points unchanged at 0.29. The effective rate declined.

Fifteen-year FRM had a rate of 2.71 percent, up 1 basis point from the prior week. Points rose to 0.35 from 0.32 and the effective rate increased.

The average contract interest rate for 5/1 adjustable-rate mortgages (ARMs) fell 11 basis points to 2.89 percent while points increased to 0.12 from 0.02. The effective rate moved lower.  The ARM share of activity was unchanged at 3.0 percent.

MBA also reports that the number of loans in COVID-19 forbearance plans continued to dwindle during the week ended July 12. The latest Forbearance and Call Volume Survey showed the share of those loans decreased by 38 basis points from 8.18 percent of servicers' portfolios in the prior week to 7.80 percent. This leaves an estimated 3.9 million homeowners are in forbearance plans.

The decline affected all servicer portfolios with the share of Fannie Mae and Freddie Mac loans down for the sixth straight week to 5.64 percent, a 43-basis-point improvement. Ginnie Mae loans decreased 30 basis points to 10.26 percent, while the forbearance share for portfolio loans and private-label securities (PLS) fell 52 basis points to 10.41 percent. The percentage of loans in forbearance for depository servicers dropped to 8.23 percent, and the percentage of loans in forbearance for independent mortgage bank (IMB) servicers decreased to 7.83 percent.

"The share of loans in forbearance dropped to its lowest level in over two months, driven by an increase in the pace of exits as more homeowners have been able to get back to work," said Mike Fratantoni, MBA's Senior Vice President and Chief Economist. "The decline in the forbearance share was broad based, with decreases for GSE, Ginnie Mae, and portfolio/PLS loans."

Added Fratantoni, "Almost half of borrowers remaining in forbearance are now in an extension of the original term, while the remainder are in their initial forbearance plan. The pace of new forbearance requests remains quite low compared to earlier in the crisis, but we are watching carefully for any increases due to either the pick-up in COVID-19 cases or the cessation of enhanced unemployment insurance benefits at the end of this month.