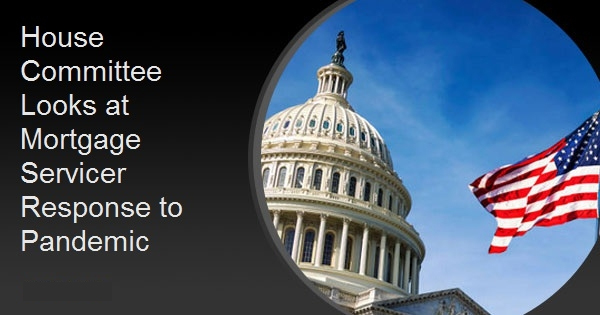 The subcommittee's memorandum lays out some of the issues the hearing is designed to air concerning the servicer industry's response to the CARES (Coronavirus Aid, Relief, and Economic Security Act. Cares was enacted on March 27, 2020, in part to provide protections for homeowners facing economic hardships due to the pandemic.

As of the mid-June, nearly 33 million people claimed unemployment benefits compared to 1.6 million a year earlier, and at the end of May 7.76 percent of mortgages were a month or more past due. While the protections in the CARES Act do not cover all residential mortgages in the United States, federally backed mortgages represent about 70 percent of outstanding single-family mortgages and increase opportunities for homeownership among low- and moderate- income borrowers. As of June 28, 8.39 percent of all mortgages in mortgage servicers' portfolios, were in forbearance.

The memorandum says that there has been at times inconsistent and potentially confusing guidance provided to those who must administer to protections afforded by the act which include an initial forbearance period of up to 180 days with a possible extension to one year and a moratorium on foreclosures. Fannie Mae and Freddie Mac have issued different guidance about the forbearance duration and there has been other guidance provided by the Consumer Financial Protection Bureau (CFPB) and the Conference of State Bank Supervisors.

A review of servicers websites conducted by the Housing and Urban Development (HUD) Office of Inspector General found many with no consumer information about the CARES Act and others with inconsistent or incorrect guidance. There is also concern that the requirement that servicers continue to advance principle and interest payments to investors and pay property taxes and insurance premiums for homeowners in forbearance will provide serious liquidity issues for servicers.

Each of the witnesses provided transcripts of their prepared testimony. Highlights are summarized below.

Cohen said she was appearing on behalf of a dozen or more consumer groups as well as the National Consumer Law Center. She called the forbearance provisions of the CARES Act "an important first step in preserving homeownership and helping struggling homeowners but called for additional action

Williams said the pandemic has had a crushing and devastating effect on black homeowners because of mass unemployment. Roughly 24 percent of them reported some difficulty in making their June mortgage payments and there is a 13-percentage point gap between white and Black homeowners in their rates of forbearance.

He urged Congress to take action to ensure that their actions and those of the government to maintain homeownership are equitable.

Griffin said three months after passage of the CARES Act, the housing counselors her organization represents are still hearing of serious problems with servicers. They include:

The DeMarco organization's membership includes mortgage servicers and he said that industry is quite different from the one he encountered while administering the FHFA during the housing crisis. Its capacity and commitment to serve customers and the tools available to provide near-term relief and long-term solutions is far greater than it was twelve years ago.  The challenges facing homeowners are different as well.

In the Great Recession, delinquency rates took six years to grow from the low point to the peak.  With the pandemic rates have gone from record lows to a 9 percent forbearance rate in less than two months. In response, servicers:

By late May, just two months since enactment of the CARES Act, nearly 4.8 million households were on a forbearance plan. This happened because servicers, both bank and nonbank, are better prepared and nimbler today than they were in the past crisis.

He added that 9.6 percent of non-federally backed mortgages were also in forbearance by the end of May. "This is a clear indication that bank portfolio lenders and other investors have also responded voluntarily, without a federal directive, providing borrower payment relief at an even greater rate than we see for GSE loans," he said.

DeMarco cautioned that there are many challenges remaining in the effort to quickly assist families facing disruptions to their financial circumstances. The two biggest are (1) the unknown duration of the pandemic and the consequent economic disruptions and (2) the transition from short-term payment relief to permanent solutions, which must be tailored to affected households. Prompt and effective borrower - servicer communication, combined with stability in program rules, will be key to successful resolution.