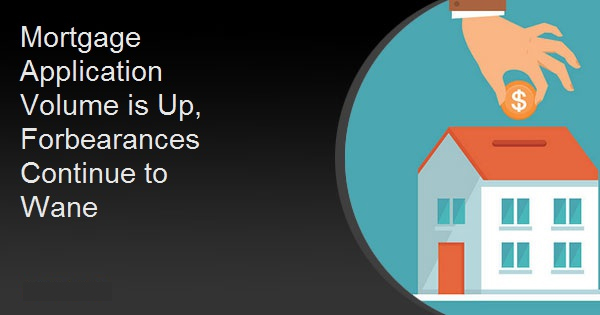 Mortgage Application Volume is Up, Forbearances Continue to Wane

Mortgage application volume increased last week, bouncing back slightly from the prior holiday shortened period. The Mortgage Bankers Association (MBA) said its Market Composite Index, a measure of volume, gained 5.1 percent on a seasonally adjusted basis during the week ended July 10 and was 16 percent higher before adjustment. The volume during the week ended July 3 was adjusted to account for the Independence Day holiday.

"Mortgage rates continued their downward trend, with the 30-year fixed rate falling 7 basis points to 3.19 percent - another record low in MBA's survey and 63 basis points lower than the recent high in late March," Joel Kan, MBA's Associate Vice President of Economic and Industry Forecasting said. "The drop in rates led to a jump in refinance activity to the highest level in a month, with refinance loan balances also climbing to a high last seen in March.  Purchase applications fell over the week but remained 15 percent higher than a year ago - the eighth consecutive week of year-over-year increases. Purchase activity remains relatively strong, despite the continued economic uncertainty and high unemployment caused by the ongoing pandemic."

Contract interest rates moved lower or were effectively unchanged across all loan types. Effective rates declined across the board.

The average contract interest rate for 30-year fixed-rate mortgages (FRM) with loan balances at or below the conforming limit of $510,400 decreased to 3.19 percent from 3.26 percent. Points ticked down to 0.33 from 0.35.

The rate for jumbo 30-year FRM, loans with balances exceeding the conforming limit, was 3.53 percent with 0.29 point. The previous week the rate was 3.52 percent with 0.36 point.

Fifteen-year FRM had an average rate of 2.70 percent, down 7 basis points. Points were unchanged at 0.32.

The interest rate for adjustable rate mortgages (ARMS) averaged 3.0 percent, up from 2.98 percent the prior week, but points decreased 8 basis points to 0.02. The share of applications for those loans dropped to 3.0 percent from 3.4 percent.

MBA also announced a fourth consecutive decrease in the number of loans in COVID-19 forbearance. The frequency of those loans declined by 21 basis points compared to the prior week to 8.18 percent of servicer portfolios as of July 5. MBA's latest Forbearance and Call Volume Survey data shows an estimated 4.1 million homeowners are now in forbearance plans.

The share of Fannie Mae and Freddie Mac loans in forbearance dropped for the fifth week in a row to 6.07 percent, a 10-basis-point improvement and the forborne portion of Ginnie Mae loans decreased 116 basis points to 10.56 percent. There was, however, an 85-basis point increase in loans serviced for private-label securities (PLS) and portfolio lenders to 10.93 percent as forborne loans were bought out of Ginnie Mae pools and into bank portfolios. The percentage of loans in forbearance by depository servicers and independent mortgage bank services both declined, to 8.80 percent and 8.10 percent respectively.

"The share of loans in forbearance continues to decrease, as more workers are brought back from temporary layoffs. However, our survey reveals a notable shift in the location of many FHA and VA loans, which have been bought out of Ginnie Mae pools - predominantly by bank servicers - and moved onto bank balance sheets," said Mike Fratantoni, MBA's Senior Vice President and Chief Economist. "As a result, there was a sharp drop in the share of Ginnie Mae loans in forbearance, and an offsetting increase in the share of portfolio loans in forbearance. These buyouts enable servicers to stop advancing principal and interest payments, and to work with borrowers in the hope that they can begin paying again before they are re-securitized into Ginnie Mae pools."

Added Fratantoni, "Forty-three percent of loans in forbearance are now in an extension following their initial forbearance term, while more than 10 percent of borrowers entered into a deferral plan to exit forbearance - down from 16 percent the week prior. For those exiting forbearance over the next several months, we expect to see many of the borrowers with GSE loans to utilize the deferral option."

MBA's Forbearance and Call Volume Survey did note an uptick in calls to servicers. Total weekly forbearance requests as a percent of servicing portfolio volume (#) increased from 12 percent to 13 percent while weekly call center volume increased 1 percentage point to 7.8 percent. The latest survey covers the period from June 29 through July 5, 2020.