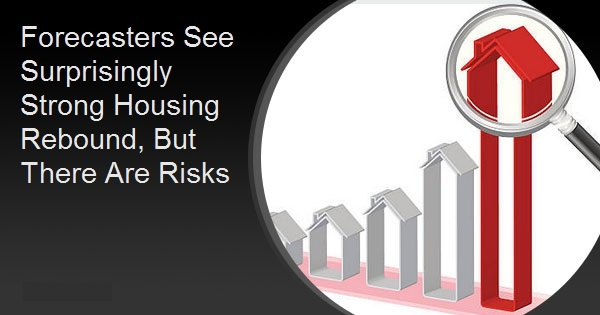 Forecasters See Surprisingly Strong Housing Rebound, But There Are Risks

The reopening of the economy in several states from the COVID-19 shutdowns has moved Fannie Mae's Economic and Strategic Research (ESR) Group to raise its estimate for the 2020 full year GDP from the 5.4 percent decline it predicted in June to a 4.2 percent downturn. The economists say this improvement is almost entirely due to a stronger pace of recovery than they had anticipated. They caution that the current surge of cases in many areas will drag on growth in the future, however, they expect any future shutdowns and behavioral changes will be less severe than in the first round. Furthermore, given that consumer spending is still down, future behavioral responses will likely translate into only a drag on growth rather than a sharp decline, as occurred in the early spring.

The risks to their forecast are balanced between upside and downside risks and revolve around the pandemic. The downside is the current resurgence in cases which could lead to regional shutdowns and self-imposed quarantines by consumers and businesses. To the upside, if the current wave doesn't translate into severe cases, then consumer spending made be more robust than currently expected. There is also uncertainty about the extension of unemployment benefits and the passage of additional stimulus packages.

The ESR group calls the housing rebound unexpectedly strong and early date indicates the improvement will continue in June and July. May's existing home sales reflected contract signings in March and April and were down 9.7 percent month-over-month. Fannie Mae expects that to be the near-term trough. Pending sales jumped 44.3 percent in May presaging a strong sales number for June and early July. Purchase mortgages also continued to surge in June, up 16.7 percent year-over-year.

The economists said they had expected purchase activity to rebound in May and June but given the magnitude they have revised their existing home sales forecast for the second quarter from 4.1 million annualized units to 4.3 million and boosted the Q3 estimate from 4.9 million units to 5.4 million. Sales should wane later in the summer as pent-up demand is satisfied and inventories continue to be constrained. Full year existing sales will be down about 7.5 percent compared to 2019 then will grow 4.0 percent in 2021 as the economy continues to recover. New home sales held up better in the early spring than existing sales. At the low point in April new home sales were down 15.6 percent on an annual basis while existing homes suffered a 24.8 percent decline. Builders offered discounting in March and April to move inventory and had fewer concerns about the properties being shown to buyers than did homeowners.

This stronger pace of new home sales in recent months has outpaced construction. Single-family starts were flat in May and the ratio of new home sales to starts was at the highest level since 2009. Sales cannot continue at recent levels unless construction picks up, which Fannie Mae expects will happen in coming months. However, it will take some time before inventories are rebalanced. Both labor shortages and tighter credit for construction and development loans may also limit the pace of new construction.

The strength of sales has led Fannie Mae to revise its forecast for home price gains. It previously predicted annual growth for the year of 0.4 percent but are now expecting an increase of 4.4 percent. However, strong price appreciation in the short run is expected to be partially offset later, as house price appreciation slows meaningfully moving into 2021, consistent with continued expected elevated unemployment rates over this period.

The ESR group points to a possible risk specific to its housing forecast due to uncertainty in assessing future homebuyer behavior. They current assume that recent purchase activity strength is largely driven by low mortgage rates and a reshuffling of sales due to the earlier shutdowns. However, it is possible that a major consumer preference change is underway, which could lead to a heightened level of home sales going forward. As remote working arrangements become more common, commuting distance may become less relevant to homebuyers, which could lead to a significant movement of households out of high-cost metros and central business districts. More generally, if there is a broad reassessment of desired housing features and amenities, home sales may remain elevated for quite some time relative to what macroeconomic conditions and mortgage rates might suggest. In addition, new single-family home construction spending, as well as remodeling expenditures, would likely be higher than their forecast, while multifamily housing could experience weakened demand. Home price growth may also vary greatly across local geographic levels and housing types, as the readjustment process occurs.

The economists also revised their purchase mortgage origination forecast consistent with the upgrades to home sales and house price predictions. They now expect purchase volumes to total $1.26 trillion in 2020, about $40 billion higher than last month's forecast, though this is still significantly lower than 2019 volumes. Purchase volumes will then grow by around 1.7 percent in 2021, as the broader economy continues to improve.

The forecast for refinance originations was also revised upward by 5.5 percent to nearly $1.9 trillion for 2020 based on stronger-than-expected acquisition, securitization, and application activity. The forecast for 2021 was left unchanged. According to Freddie Mac, the 30-year fixed rate fell to 3.03 percent in the second week of July, a new all-time low. At that rate Fannie Mae estimates that nearly 60 percent of all outstanding loan balances have at least a half-percentage point incentive to refinance.