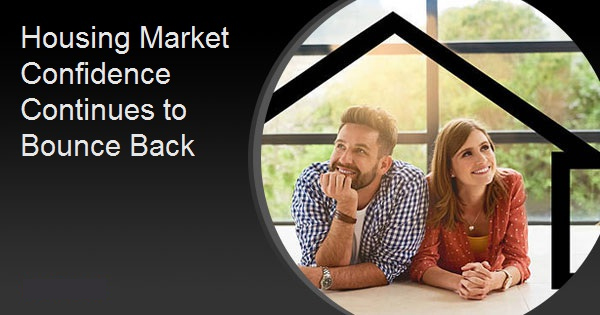 Fannie Mae's Home Purchase Sentiment Index (HPSI) continued to rebound last month from its sharp retreat to near record lows in the Spring. The Index, based on selected responses to the company's National Housing Survey (NHS) fell an aggregate 29.5 points in March and April, in reaction to the COVID-19 crisis. It added back 4.5 points in May and gained another 9 points in June.

The Index is now at 76.5, with four of the six survey components used in the index moving higher. The HPSI however, is still down 15 points from its level in June 2019.

Survey respondents expressed a significantly more positive view of homebuying and home selling conditions than in recent months. Sixty-one percent of participants said they thought it was a good time to buy a home and the net positive answers increased from 2.0 percent in May to 34 percent in June.

"Good time to sell" answers fell to a net negative of 36 percent and 30 percent in April and May, respectively, and were still not back in positive territory in June but did recover to -7 percent. Only 41 percent viewed this as a good time to sell. Confidence about job security has long had the highest net positives on the HPSI but that metric has suffered in the current crisis. While 74 percent said they were not concerned about losing their jobs in June, the percentage of those who are has doubled in the last few months to 26 percent. This leaves the net who are not concerned at 48 percent down about 30 points since the beginning of the year.

The net positive percentage of respondents who say home prices will go up in the next 12 months increased this month by 18 percentage points to 9 percent. Consumers also tend to think mortgage rates may be nearing the bottom. The net of those who said rates would fall over the next 12 months fell from 0 percent to -15 percent.

"A second month of improvement in June allowed the HPSI to regain some of the sharp losses in optimism observed in March and April," said Doug Duncan, Senior Vice President and Chief Economist. "The share of renters who say it's a good time to buy a home is now at its highest level in five years, suggesting favorable conditions for first-time homebuying, consistent with the recent rebound in home purchase activity. Homeowners seem to have taken note of the resulting lack of housing supply, with an increased share saying it's a good time to sell a home. However, this activity may cool again in the coming months, depending on the extent to which it can be attributed to consumers having chosen to delay or to accelerate homebuying plans due to the pandemic. Survey respondents' persistent, substantially elevated concerns about job security in the face of record unemployment remains a key takeaway, particularly among renters and homeowners with a mortgage. We believe the continuing uncertainty regarding the coronavirus' containment suggests an uneven and potentially volatile course toward economic recovery."

While it is not part of the index, the percentage of respondents who think the economy is on the right or the wrong track shifted slightly last month. Right track answers rose 4 points to 33 percent while wrong track answers were down 3 points to 57 percent. This, however, is still almost a complete reversal of the two tracks relative to their positions following the February survey.