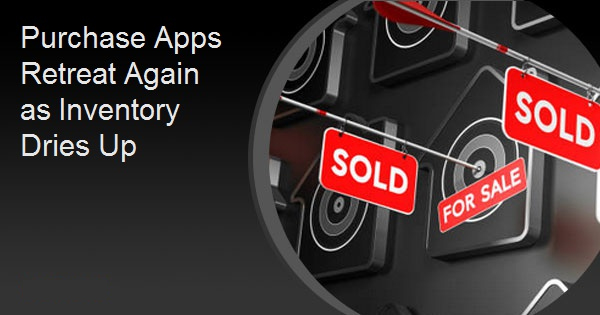 Applications for both refinancing and purchase mortgages retreated last week, pulling the Mortgage Bankers Associations (MBA's) Market Composite Index lower for the second time in as many weeks. MBA said the index, a measure of application volume, declined by 1.8 percent on a seasonally adjusted basis during the week ended June 26 and was down 2.0 percent on an unadjusted basis.

While the Refinance Index ticked down 2 percent from the week ended June 19, low interest rates kept the refinancing volume 74 percent higher than the same week one year ago. The refinance share of mortgage activity decreased to 61.2 percent of total applications from 61.3 percent the previous week.

The seasonally adjusted Purchase Index dipped 1 percent and the unadjusted version was down 2 percent compared with the previous week. Volume was still 15 percent higher than the same week one year ago.

"Mortgage applications fell last week despite mortgage rates hitting another record low in MBA's survey. Investors are contemplating the risks of the recent resurgence of COVID-19 cases to the labor market and economy, and Treasury rates and mortgage rates are moving lower as a result," said Joel Kan, MBA's Associative Vice President of Economic and Industry Forecasting. "After two months of strong growth, purchase applications declined for the second week in a row. The weakening in activity is potentially a signal that pent-up demand is starting to wane and that low housing supply is limiting prospective buyers' options. The average purchase application loan size increased to a record high in our survey - more proof that tight inventory conditions are leading to faster price growth."

Added Kan, "Refinance applications also decreased but remained 74 percent higher than a year ago. The 30-year fixed rate has been below the 3.5 percent mark since late March. It is possible that many borrowers have already refinanced or are waiting for rates to go even lower."

The average contract interest rate for 30-year fixed-rate mortgages (FRM) with origination balances at or below the conforming limit of $510,400 decreased to 3.29 percent from 3.30 percent, with points increasing to 0.36 from  0.32. The effective rate was unchanged from last week.

The average rate for jumbo 30-year FRM, loans with balances exceeding the conforming limit, declined 3 basis points to 3.59 percent. Points increased to 0.31 from 0.29 and the effective rate was down.

The rate for 30-year FRM backed by the FHA increased to 3.43 percent from 3.35 percent, with points increasing to 0.36 from 0.22. The effective rate also increased.

The contract rate for 15-year FRM was unchanged at 2.81 percent while points increased to 0.40 from 0.30. The effective rate increased from last week.

The average contract interest rate for 5/1 adjustable rate mortgages (ARMs) decreased to 3.04 percent from 3.09 percent and points declined to -0.03 from 0.01. The effective rate was lower than the prior week. The adjustable-rate mortgage (ARM) share of activity increased to 3.2 percent of total applications from 3.1 percent a week earlier.

MBA also released data from its Forbearance and Call Volume Survey for the week ended June 21 and noted that the number of loans in forbearance declined for the second consecutive week. There was a total of 4.2 million active plans at the end of the reporting period, down from 4.3 million a week earlier and the percentage of all loans in COVID-19 forbearance declined from 8.55 percent to 8.48 percent.

"The overall share of loans in forbearance declined for the second week in a row, led by the third straight drop in GSE loans," said Mike Fratantoni, MBA's Senior Vice President and Chief Economist. "Many borrowers initially received a three-month forbearance term, and as of June 21, 17 percent of loans in forbearance have now been extended, with the largest share of those being Ginnie Mae loans."

Added Fratantoni, "The level of forbearance requests remains quite low as of mid-June. The rebound in the housing market is likely one of the factors that is providing confidence to both potential homebuyers and existing homeowners during these troubled times."

Forbearance requests as a percent of servicing portfolio volume (#) decreased across all investor types: from 0.15 percent to 0.14 percent. although the percentage of calls regarding forbearance increased from 7.7 to 7.8 percent.

MBA's latest Forbearance and Call Survey covers the period from June 15 through June 21, 2020 and represents 76 percent of the first-mortgage servicing market (38.2 million loans).