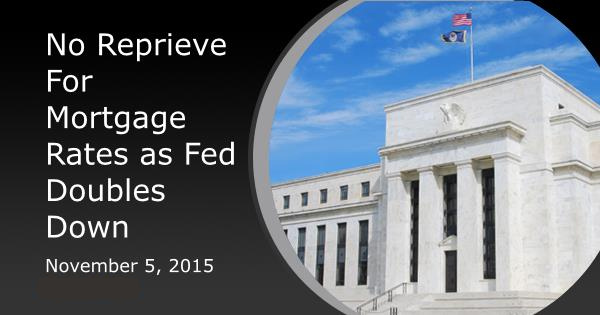 No Reprieve For Mortgage Rates as Fed Doubles Down

Last week’s newsletter focused on the discrepancies between the mainstream mortgage rate news and the real day to day changes that it fails to capture.  Specifically, by the end of last week, rates moved quite a bit higher than the mainstream reports were able to convey.  It wasn’t that the reports were wrong—simply that they were based on the Freddie Mac survey that only captures rate quotes from early in any given week.

Unsurprisingly, this week’s rate survey conveys the reality I brought to your attention last week—namely, that rates had risen to the highest levels in more than a month.  Unfortunately, that trend has continued almost every day this week, with the average 30yr fixed rate now closer to 4% as opposed to the 3.87% seen in Freddie’s survey.

Why are we seeing such an abrupt move higher?  In a word: The Fed.  This goes back to the Fed’s September Announcement.  There was a fairly broad consensus that the Fed would hike rates at that meeting.  Not only did they hold off, but they also said that global economic and financial developments could restrain economic activity and push inflation lower.

In other words, the Fed was spooked by the market flare-up at the end of August and they decided not to hike, just in case the market gyrations were the start of bigger problems.  No one had any great way to know how their assessment evolved until last week’s announcement.

As it turns out, the Fed was much less concerned with the risks mentioned in the previous announcement.  They were much closer to hiking rates than market realized and so they used this most recent announcement to alert financial markets to that fact.  This was accomplished by language that specifically mentioned a potential rate hike at the December Fed meeting.  It was the first time the Fed had used such language in more than 16 years, and markets definitely got the message.

Rates have been moving higher ever since.  The weakness was reinforced this week when Yellen confirmed the potential for a December rate hike.  Friday’s big jobs report threatens to take that confirmation to the next level.  Most market participants agree that it would only take an “OK” report to keep the Fed on track for a December hike.

While the Fed Funds Rate does not directly dictate longer term rates like most mortgages, it's common to see the entire spectrum of rates move higher in anticipation of a hike.  In other words, if the jobs data isn’t awful, expect more pressure on mortgage rates going forward.

This comes at a somewhat inopportune time for Housing and Mortgage markets as several of this week’s reports note a slowdown in various housing metrics.  Corelogic’s September Home Price Index showed a substantial deceleration in monthly price appreciation with forecasts calling for a further slowdown in the coming year.  RealtyTrac takes this notion a step further, suggesting that the housing market may be plateauing.

Away from those more gloomy assessments, context is important.  First of all, the home price deceleration is just that.  Prices are rising—just not as fast as they had been rising.  This is actually a good thing as it will help affordability stay stable if rates continue to rise.  Also helpful is the steady stream of guideline updates that expand the credit box.  To that end, Fannie announced several updates this week and the Mortgage Bankers Association noted an improvement in their Credit Availability Index.