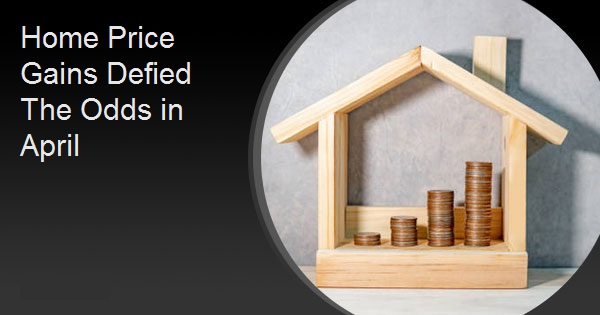 House prices continued to be unfazed by the current economic upheaval. The Federal Housing Finance Agency (FHFA) reports that its U.S. House Price Index for April, the first full month that reflects the impact of the pandemic, continued to rise almost unabated.

The index increased by 0.2 percent from March compared to a 0.1 percent increase from February to March. On an annual basis the index rose 5.5 percent, down slightly from the 5.7 percent gain in both February and March. Prices did decline from March in two of the nine census divisions, New England was down 0.2 percent and the South Atlantic was off by 0.5 percent. The index in both the Pacific and Mountain regions were unchanged. Gains elsewhere were topped by an 0.8 percent increase in the West South Central division. The 12-month changes were all positive, ranging from 5.0 percent in the Middle Atlantic division to 6.8 percent in the Mountain division. "U.S. house prices posted another positive monthly increase in April," according to Dr. Lynn Fisher, Deputy Director of the Division of Research and Statistics at FHFA. "Regionally, results varied. Two of the usually stronger growth areas, the Mountain and Pacific divisions, were flat over the month but other divisions continued to experience strong price appreciation even with all of the COVID-19 challenges. Both the New England and South Atlantic regions saw monthly decreases in prices, but all divisions posted positive year over year growth of at least 5 percent. The number of transactions used to estimate the HPI were slightly down from March to April but were still a robust sample. We expect the normal spring bump in sales was pushed off by the COVID-19 shutdowns and may extend into the summer months as states reopen and real estate sales pick back up."

FHFA's purchase only HPI is based on the sales of homes financed by one of the two GSEs, Fannie Mae or Freddie Mac. The Index was benchmarked at 100 in January 1991 and is currently at 288.3