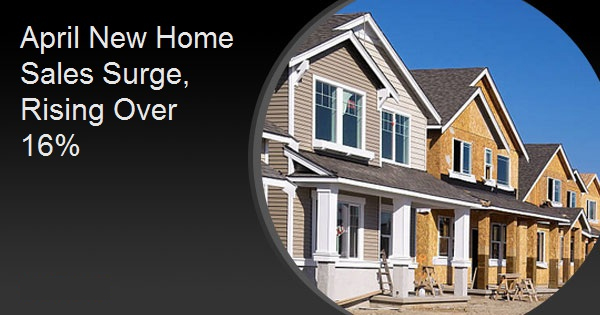 After its pandemic-related plunge in April, the rapid recovery of the Housing Market Index, a measure of builder confidence, seems justified by today's Census Bureau report on new home sales.

For the second month in a row, sales of newly constructed homes outdistanced expectations, rising by 16.6 percent to a seasonally adjusted annual rate of 676,000 units. However, the original April estimate of 623,000 units was revised down drastically to 580,000. This month's surge did exceed last May's 580,000 unit rate by 12.7 percent, but it seems that this data is more susceptible to revision in the current environment than in more normal times.

Sales exceeded the upper limits of analysts predictions, which in the case of those polled by Econoday ranged from 600,000 to 670,000 units. The consensus was a rate of 630,000-units.

At the end of May there were 318,000 new homes available for sale. This is an estimated 5.6-month supply at the current rate of sale. The supply in both April and in May 2019 was estimated to be 6.7-months. The median months on the market increased from 3.4 months to 3.8 months.

New home sales in the Northeast were 45.5 percent higher than in April as well as in May of last year. Sales were down in the Midwest month-over-month by 6.4 percent but remained 2.8 percent higher on an annual basis.

The sales rate in the South rose 15.2 percent compared to the previous month and maintained a 6.3 percent edge over the prior May. Sales in the West jumped by 29.0 percent and 31.0 percent from the two earlier levels.