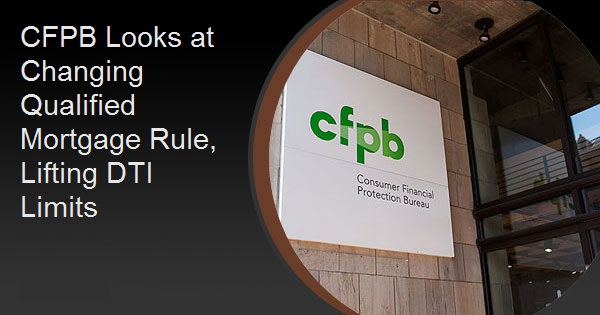 With its so-called GSE Patch set to expire on January 10, 2021 (unless by some miracle the conservatorship of Fannie Mae and Freddie Mac (the GSEs) ends earlier), the Consumer Financial Protection Agency (CFPB) has issued two proposed amendments to the Ability to Repay/Qualified Mortgage Rule (ATR-QM Rule).

The ATR-QM Rule provides a safe harbor that protects lenders from lawsuits charging lenders for failing to appropriately quality a borrower's repayment ability. In general, the QM rule requires that a loan comply with prohibitions on certain loan features, points and fee limitations. It also requires that a borrower's a debt-to-income (DTI) ratio does not exceed 43 percent and that creditors "calculate, consider, and verify debt and income for purposes of determining the consumer's DTI ratio using the standards contained in Appendix Q of Regulation Z."

The FHA, VA, and USDA have different rules on debt, so they were excluded from the DTI limit, leaving it only to apply to the GSEs and non-government affiliated lenders. This exclusion was rectified by the patch which eliminated the 43 percent debt limit for loans that otherwise complied with guidelines that qualified those loans for purchase or guarantee by one of the GSEs.

The first proposed amendment (which CFPB refers to as a notification of proposed rulemaking or NPRM) extends the sunset date for the patch. Under the proposed change, the temporary QM category will expire on the earlier of: (1) the effective date of the final amendments to the General QM category; or (2) the date that the GSEs exit conservatorship. It also states that the Bureau does not intend for final amendments to be effective prior to April 1, 2021 nor does it intend to amend the portion of Regulation Z that provides that the Temporary GSE QM category when the GSEs exit conservatorship.

The second NPRM proposes to amend the definition of a permanent "General QM" category. CFPB says it expects that such amendments would allow some portion of loans that are currently made as Temporary GSE QM loans to receive General QM status and thereby help facilitate a smooth and orderly transition away from the Temporary GSE QM loan definition.

Among other things, the proposal would remove the General QM loan definition's 43 percent DTI ratio limit and replace it with a limit based on the loan's pricing. It would also remove Appendix Q and any requirements to use it to verify debt and income for General QM loans.

A loan generally would meet the General QM loan definition only if the annual percentage rate (APR) exceeds the average prime offer rate (APOR) for a comparable transaction by less than two percentage points as of the date the interest rate is set. However, it would also provide higher thresholds for first-lien loans with loan amounts of less than $109,898 (all loan amounts would be indexed for inflation) and for subordinate-lien loans:

Additionally, the proposed rule would retain the ATR-QM Rule's existing product-feature and underwriting requirements and limits on points and fees.

A creditor would be required to retain documentation showing how it took into account income, debt, and DTI ratio or residual income when making its ability-to-repay determination but the rule would not prescribe how a creditor must consider DTI ratio or residual income. A creditor would also be required to verify income, assets, debt obligations, alimony, and child support consistent with the verification requirements in the ATR-QM Rule's general ability-to-repay standard.

Creditors would receive safe harbor protection for complying with verification standards in one or more specified versions of certain documents. CFPB is seeking comment on whether these documents should include the Fannie Mae Single Family Selling Guide and the Freddie Mac Single-Family Seller/Servicer Guide, as well as governmental standards from the Federal Housing Administration, United States Department of Veterans Affairs, and the United States Department of Agriculture.

The proposal does not seek to change the ATR-QM Rule's current threshold separating safe harbor from rebuttable presumption QMs. Under that threshold, a loan is a safe harbor QM if its APR exceeds APOR for a comparable transaction by less than 1.5 percentage points as of the date the interest rate is set or by less than 3.5 percentage points for subordinate lien transactions.