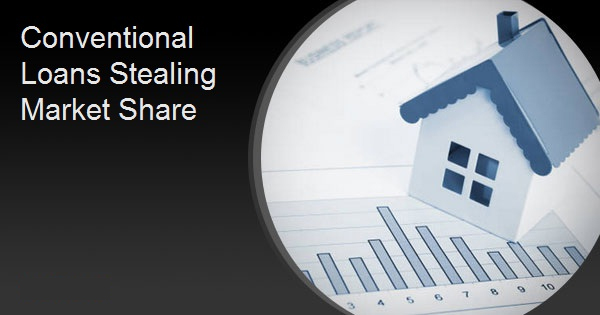 The dominance of conventional lending continued to grow in May. Ellie Mae's Origination Insight Report says those loans made up 82 percent of originations during the month, up from 81 percent in April and 70 percent at the end of 2019. The FHA share has shrunk from 17 percent to 9 percent over that period and VA loans had a 6 percent share, down from 9 percent.

The company's reports that the interest rate on all loans closed in May averaged 3.43 percent, down from 3.48 percent in April. The conventional 30-year rate averaged 3.44 percent, down 4 basis points, and the FHA and VA rates dropped 9 basis points and 7 basis points to 3.45 percent and 3.24 percent, respectively. As rates dropped, the percentage of refinances held steady at 65 percent of closed loans in May. The VA share of purchase loans, however, jumped from 69 to 75 percent.

"Interest rates continued to decline in May, but we are seeing signs of refinances leveling out as the percentage of closed refinances held at 65 percent for the second month," said Jonathan Corr, President and CEO of Ellie Mae. "As we enter the summer months that typically bring a busier purchase market, we will watch to see if the numbers shift further as homebuyers continue to take advantage of low rates and a loosening of inventory after a tight March and April driven by the shelter in place."

The time to close all loans increased to 45 days in May, up from 42 days in April. Refinancing accounted for most of the extra time. The closing period for those loans grew from 39 days in April to 44 days.

Closing rates declined, a bit, from 76.5 percent in April and 78 percent in March to 76 percent. Ellie Mae bases its closing rate estimate on a sampling of loan applications initiated 90 days earlier, in this case the February 2020 applications.

Ellie Mae's Origination Insight Report mines data from a sample of approximately 80 percent of all mortgage applications that were initiated on its mortgage management system. The company says its report is a strong proxy of the underwriting standards employed by lenders across the country.