Most of this week’s  focus has been on financial markets where stocks, oil and rates all leveled-off after the exceptional volatility seen in the previous week.   Interest rates didn’t experience nearly as much volatility as other sectors, but they’ve all generally moved back in a more risk-tolerant direction together (higher stocks, rates, oil prices), after moving sharply lower together.

In simpler terms, rates and stocks fell 2 weeks ago and they bounced back last week.  This week has been significantly flatter, by comparison.  Interest rates have been especially well-centered on the proverbial fence.  That’s important because it suggests that investors are waiting for something to push them off the fence.   Fortunately, we have clues as to what that might be.

At the end of last week, Fed Vice Chair Stanley Fischer made some important comments at the Fed’s annual symposium in Jackson Hole (generally regarded as a unique venue for the Fed to speak a bit more candidly, and potentially drop bigger hints about what’s in store).  Yellen isn’t there this year, so Fischer is the highest ranking Fed official on record.

Fischer said there was a “strong case for a September hike” and that there was "a little over two weeks before we make the decision."  He further spoke to the importance of these 2 weeks by saying "we've got time to wait and see the incoming data."  In other words, the economic reports coming out this week and next may play a key role in the Fed’s rate-hike decision.  The fact that bonds/rates have been so flat since then only puts more emphasis on Friday's big jobs report.  Weeks like these, where rates barely budge, are typically followed by a much larger move higher or lower.

There’s been little by way of housing-specific news since last Friday.  On a related note to the market volatility, the MBA noted a sharp increase in mortgage applications.  They cited the volatility as providing a temporary window of lower-rate opportunity despite the week-over-week mortgage rate being unchanged. 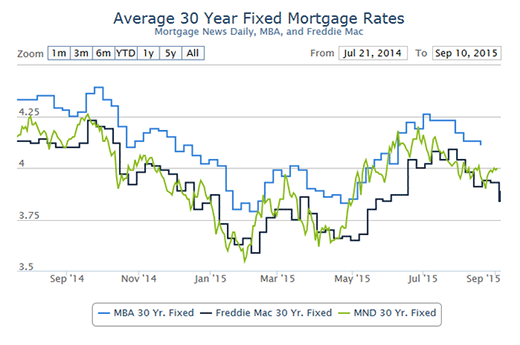 In a separate report, the MBA noted another modest increase in Mortgage Credit Availability.  As has been the case on several occasions, Jumbo guidelines are doing much of the heavy-lifting.  But government agencies have also steadily unveiled guideline improvements that will allow more potential homeowners to qualify.  The most recent example from Fannie Mae makes fairly substantial changes to the way some self-employed borrowers are evaluated.  For now, the new guidelines are voluntary, but all lenders will be participating by February 1, 2016.