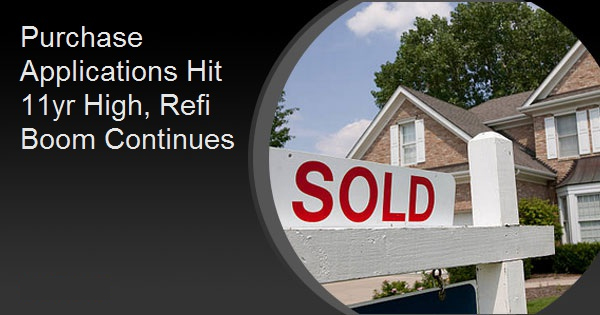 Mortgage Application volumes continued to grow during the week ended June 12 as mortgage rates reached new lows and states allowed more businesses to reopen. The Mortgage Bankers Association (MBA) said its Market Composite Index, a measure of application volume, increased 8.0 percent on a seasonally adjusted basis from one week earlier. On an unadjusted basis, the Index was up 7 percent compared with the previous week.

The volume of refinancing applications moved higher for the second straight week. That index increased 10 percent compared to the week ended June 5 and was 106 percent higher than the same week one year ago. Refinancing accounted for 63.2 percent of application activity, up from 61.3 percent the prior week.

"Purchase applications increased to the highest level in over 11 years and for the ninth consecutive week. The housing market continues to experience the release of unrealized pent-up demand from earlier this spring, as well as a gradual improvement in consumer confidence," said Joel Kan, MBA's Associate Vice President of Economic and Industry Forecasting. "Mortgage rates dropped to another record low in MBA's survey, leading to a 10 percent surge in refinance applications. Refinancing continues to support households' finances, as homeowners who refinance are able to gain savings on their monthly mortgage payments in a still-uncertain period of the economic recovery."

Interest rates, both contract and effective, declined for all fixed-rate mortgage (FRM) loans. The average contract interest rate for 30-year FRM with loan balances at or below the conforming limit of $510,400 decreased to 3.30 percent from 3.38 percent, the lowest level in survey history. Points dipped to 0.29 from 0.30.

The average contract interest rate for jumbo 30-year FRM, loans with balances exceeding the conforming limit, decreased to 3.67 percent from 3.70 percent. Points rose to 0.28 from 0.26.

The average contract interest rate for 5/1 adjustable rate mortgages (ARMs) increased to 3.07 percent from 3.02 percent, points increased to 0.29 from 0.27 and the effective rate was higher. The share of applications that were for ARMs declined from 3.1 percent the prior week to 2.8 percent.

MBA also reported an uptick in the number of loans in forbearance during the week ended June 7. Those loans, totaling 4.3 million, now represent 8.55 percent of loan servicers' portfolios, up from 8.53 percent the previous week.

There was a shift in loans by investor type with the forborne share of loans serviced for the GSEs Fannie Mae and Freddie Mac declining from 6.40 to 6.38 percent while those in forbearance for portfolio and private-label securities increased to 10.18 percent of that total from 10.03 percent the prior week. The Ginnie Mae (FHA/VA/USDA loans) share was unchanged at 11.83 percent. The percentage of loans in forbearance for depository servicers rose to 9.24 percent, and increased to 8.43 percent for independent mortgage bank (IMB) servicers

"MBA's survey results from the first week of June showed a slight uptick in the overall share of loans in forbearance, but this increase was primarily driven by a larger share of portfolio and PLS loans in forbearance. Half of the servicers in our sample saw the forbearance share decline for at least one investor category," said Mike Fratantoni, MBA's Senior Vice President and Chief Economist. "Although there continues to be layoffs, the job market does appear to be improving, and this is likely leading to many borrowers in forbearance deciding to opt out of their plan."