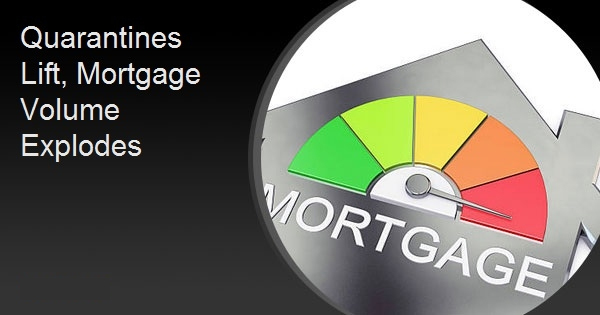 The Mortgage Bankers Association (MBA) says that mortgage application volume rose significantly during the week ended June 5 as many states began to lift restrictions on individuals and businesses imposed in response to the COVID-19 pandemic. MBA's Market Composite Index, a measure of mortgage loan application volume, increased 9.3 percent on a seasonally adjusted basis from one week earlier and was 20 percent higher on an unadjusted basis.

Purchase applications continued upward, gaining 5 percent from the previous week on a seasonally adjusted basis, the eighth straight week of gains. The volume was up 15 percent before adjustment and was 13 percent higher than during the same week in 2019.

The Refinance Index gained 11 percent compared to the previous week and was 80 percent higher than the same week one year ago. The refinance share of mortgage activity increased to 61.3 percent of total applications from 59.5 percent the previous week.

"Fueled again by low mortgage rates, pent-up demand from earlier this spring, and states reopening across the country, purchase mortgage applications and refinances both increased. The recovery in the purchase market continues to gain steam, with the seasonally adjusted index rising to its highest level since January. Purchase activity increased for the eighth straight week and was a notable 13 percent higher than a year ago," said Joel Kan, MBA's Associate Vice President of Economic and Industry Forecasting. "Refinances moved higher for the first time in nearly two months, with both conventional and government applications rising and the overall index coming in 80 percent above year-ago levels."

Interest rates were mixed on both a contract and an effective basis, The average contract interest rate for 30-year fixed-rate mortgages (FRM) with loan balances at or below the conforming limit of $510,400 increased to 3.38 percent from 3.37 percent. Points were unchanged at 0.30 leaving the effective rate also unchanged.

The rate for jumbo 30-year FRM, loans with balances exceeding the conforming limit, increased to 3.70 percent from 3.66 percent, with points decreasing to 0.26 from 0.30. The effective rate was higher than the prior week.

There was an 8-basis point decline in the contract rate, to 3.38 percent, for 30-year FRM backed by the FHA. Points increased to 0.24 from 0.23 and the effective rate was down.

The average contract interest rate for 15-year FRM dipped to 2.83 percent from 2.85 percent, and points decreased to 0.26 from 0.27. The effective rate moved lower.

The average contract interest rate for 5/1 adjustable rate mortgages (ARMs) was 3.02 percent with 0.27 point. The prior week it was 3.05 percent with 0.25 point. The effective rate decreased. The ARM share of activity was 3.1 percent compared to 3.5 percent a week earlier.

MBA also said its latest survey showed an easing in demand for mortgage forbearance plans during the week ended May 31. There are now an estimated 4.3 million homeowners in those plans representing 8.53 percent of servicer portfolios. At the end of the prior week 8.46 percent of all serviced loans were in plans.

Added Fratantoni, "While servicers reported only a 1-basis-point increase in the forbearance share for GSE and Ginnie Mae loans, the increase for private-label securities and portfolio loans rose to over 10 percent, which is higher than the rate on GSE loans."

Forbearance requests as a percent of servicing portfolio volume (#) dropped across all investor types for the eighth consecutive week relative to the prior week: from 0.20 percent to 0.17 percent.

MBA's latest Forbearance and Call Volume Survey covers the period from May 25 through May 31, 2020 and represents 76 percent of the first-mortgage servicing market (38.2 million loans).