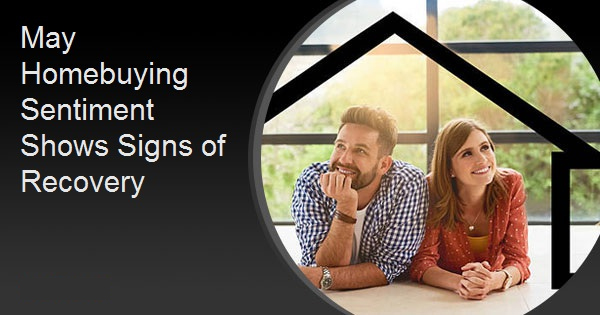 After falling an aggregate of 29.5 points in March and April, Fannie Mae says its Home Purchase Sentiment Index (HPSI) has begun to recover. The Index rose 4.5 points in May to 67.5 from an all-time survey low in April. Four of the six index components gained ground. Year over year, the HPSI is down 24.5 points.

Consumers reported a somewhat more optimistic view of homebuying conditions and, to a lesser extent home-selling conditions, in their responses to the National Housing Survey upon which the index is based. Moreover, fewer consumers reported expectations that mortgage rates will go up over the next 12 months.

"Although the HPSI's precipitous declines of March and April did not continue in May, Americans' financial, economic, and housing market concerns remain substantially elevated compared to survey history," said Doug Duncan, Senior Vice President and Chief Economist. "Low mortgage rates have helped cushion some of the impact of the pandemic on consumer sentiment regarding whether it's a good time to buy a home, which picked back up this month to late-2018 levels. Although weakened income perceptions and continuing job loss concerns, particularly among renters, are likely weighing on many would-be buyers, purchase mortgage applications have returned to mid-March levels when pandemic response measures began ramping up. Home-selling sentiment remains severely dampened due primarily to economic concerns, though increased purchase activity may improve the confidence of some potential sellers. As lockdown restrictions begin to ease across the country, we expect economic recovery to be largely shaped by consumers' decisions regarding when and how to reengage in the economy. We believe this month's HPSI results and Friday's unexpectedly favorable labor market report to be encouraging signs for the months ahead."

The net share of Americans who think mortgage rates will move lower over the next year rose 10 points to 0.0 percent. In May 2019 that net was -37 percent. Only a quarter of respondents expect rates to rise.

The two index components that did not gain ground deal with job security and household income. The percentage of Americans who say they are not concerned about losing their job in the next 12 months decreased from 76 percent to 75 percent, while the percentage who say they are concerned increased from 23 percent to 24 percent leaving a net share of those not concerned down 2 points at 51 percent.

The percentage of Americans who say their household income is significantly higher than it was 12 months ago decreased from 20 percent to 18 percent, while 19 percent said it was lower and 61 percent reported it as unchanged. This put the net reporting significantly higher income at -1 percent.