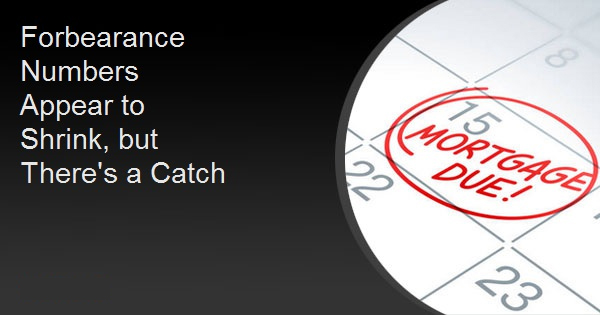 Forbearance Numbers Appear to Shrink, but There's a Catch

The number of mortgages in forbearance plans declined this past week for the first time since the CARES Act to address the COVID-19 pandemic was enacted. Black Knight said its survey showed that there were 4.73 million homeowners, 8.9 percent of those with mortgages, in forbearance plans as of June 2. This is a net decrease of 34,000 loans since May 28.

The number of approved plans, which allow homeowners to temporarily suspend or reduce mortgage payments if they are financially impacted by the pandemic, decreased by 43,000 among mortgages being serviced for Ginnie Mae (VA, FHA, and USDA loans) and the GSEs Fannie Mae and Freddie Mac.  However, the number of forborne loans serviced for others, such as private label securities or portfolio lenders grew by 9,000 loans.

Black Knight's survey tracks both the number of plans and those borrowers who make payments, whether in plans or not. It also considers past due forborne accounts as delinquent even though the CARES Act prohibits servicers from reporting them to credit agencies as such. In mid-May the company found that about 46 percent of borrowers in forbearance at the end of April had made at least a partial payment of that month's mortgage payment, apparently keeping forbearance as a safety net.

That did not continue in May. As of May 26, only 22 percent of homeowners in plans had made the months payment. Black Knight CEO Anthony Jabbour said, "If that trend holds true through the end of the month, the market should be prepared for another likely rise in the delinquency rate for May. Also, expanded unemployment benefits are scheduled to end on July 31. It remains to be seen how that will impact both forbearance requests and overall mortgage delinquencies."

The 4.73 million loans in forbearance account for a little over $1 trillion in unpaid principal. An estimated 7.1 percent of all GSE-backed loans and 12.3 percent of FHA/VA mortgages are now in forbearance.

As of June 2, 2020, the Black Knight's McDash Flash Forbearance Tracker found the following distribution of plans.

Mortgage servicers of GSE and Ginnie Mae Loans are required to advance monthly principal and interest (P&I) payments to investors in mortgage-backed securities (MBS) collateralized by those loans even when borrowers are not making their payments. Likewise, they are obligated to pay property tax and insurance bills (T&I) for those borrowers with escrow accounts. Black Knight estimates that, given the current number of forbearance plans, the cost of out-of-pocket P&I and T&I payments required of the GSEs each month will be $2.2 billion and $0.9 billion, respectively. The Ginnie Mae's servicers will have to pay $1.3 billion and 0.6 billion. Those servicing for others may also have advance payment obligations that could total $2.1 billion and $0.7 billion.