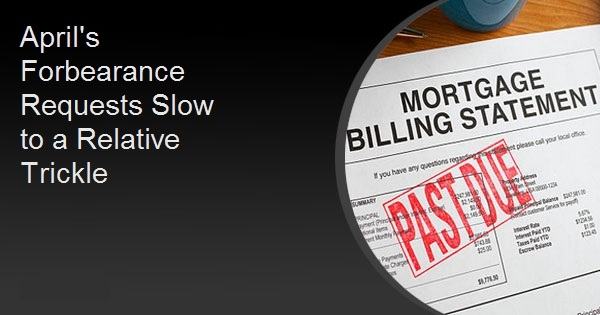 Black Knight says its research is showing that the numbers of new forbearance plans for homeowners financially affected by the COVID-19 pandemic have slowed to a trickle compared to the tidal wave in early April. Only 7,000 new plans were put in place during the week ended May 26 compared to a 325,000-net increase in the first week of May and 1.4 million in the first week of April.

The most recent increase brings the total forbearance plans to 4.76 million or 9.0 percent of all active mortgages. These loans represent more than $1 trillion in unpaid principal balances.

The largest number of loans in forbearance plans, 1.99 million, are those serviced for the GSEs Fannie Mae and Freddie Mac. Another 1.535 million are serviced for Ginnie Mae (loans backed by FHA, the VA, and USDA) and 1.233 million are mortgages belonging to "others" such as bank portfolios or investors in private label securitizations. However, in terms of the impact on portfolios, 12.6 percent of the Ginnie Mae portfolio of 12.1 million mortgages are in forbearance, as are 9.5 percent of "other" loans, and 7.2 percent of the 27.9 million GSE aggregate portfolios.

Because of contractual obligations, servicers of the government-backed loans must continue to advance principal and interest (P&I) payments to investors and taxes and insurance premiums (T&I) on behalf of loans with escrow accounts even though homeowners are not making their monthly payments. Black Knight places those obligations, given the current number of forbearance plans, at $3.6 billion a month in P&I payments and $1.5 billion in T&I payments. The Federal Housing Finance Agency, conservator and regulator of the GSEs, has capped servicer obligations for P&I advance payments on their loans at four months. Black Knight says, given today's forbearance numbers, servicers of GSE-backed loans still face up to $8.8 billion in advances over that four-month period.