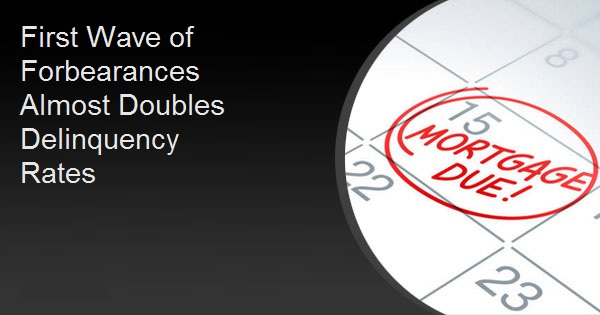 The years-long downward trend of mortgage delinquencies appears to have come to an abrupt end in April. Black Knight, in its "first look" at the month's loan performance data, said the national delinquency rate shot up 90 percent compared to March and is 86 percent higher than in April 2019 at 6.45 percent.

That rate indicates the percentage of active loans that were 30 days or more past due but not in foreclosure with 3.40 million loans in that category, 1.61 million more than the prior month and 1.59 more than in April 2019. Black Knight reported earlier this month that, as of April 30, more than 3.8 million home mortgages had entered forbearance plans. They subsequently reported that some 46 percent of borrowers in forbearance at the end of April, had continued to make at least part of their April payment

Black Knight counts mortgages for which payments have not been made as delinquent, even if they are in forbearance and servicers are not reporting them to credit bureaus under rules established by the CARES Act. This means that some of the early stage delinquencies are not in forbearance and that many that are continue to perform.

Other long-term measures continue to trend down. The number of properties in the foreclosure inventory fell by 9,000 for the month and 48,000 on an annual basis to 211,000. Foreclosure starts dropped 73 percent from the March number, reflecting in part the foreclosure moratorium put in place by the CARES act. The 7,400 starts that did occur were 82 percent fewer than a year earlier. Actual foreclosure sales fell 94 percent over that annual period.

At the end of April there were 3.6 million homeowners who were past due on their mortgages including those in foreclosure. This was the largest number since January 2015.

The single month mortality (SMM) or prepayment rate, a measure of potential refinance activity, continued to rise in April, up 23 percent from March and 136 percent year-over-year. The rate was 2.33 percent of active loans.

Black Knight will release more detailed information on April loan performance in its Mortgage Monitor. It is scheduled for publication on June 8th.