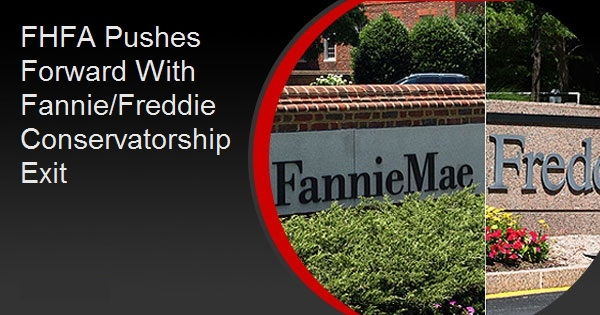 Maybe all of the talk about ending the GSE's long term incarceration in conservatorship is more than talk this time. Earlier this week both Freddie Mac and Fannie Mae announced they would be issuing Requests for Proposals (RFPs) seeking to hire financial advisors to that end. Then, late Wednesday, the Federal Housing Finance Agency (FHFA), the GSE conservator, said it was seeking comments on proposed revisions to its own 2018 proposal to establish a new regulator capital framework for the two companies. FHFA said the changes to its proposal "ensure each safety and soundness and its ability to fulfill its statutory mission across the economic cycle, in particular during periods of financial stress. The re-proposal is also a critical step toward responsibly ending the conservatorships."

FHFA Director Mark Calabria, referencing the current COVID-19 pandemic, said "This national health crisis has affirmed the importance of the mission to serve the American housing market during good times and bad. When credit dries up, low- and moderate-income households are hurt most. We must chart a course for the toward a sound capital footing so they can help all Americans in times of stress. More capital means a stronger foundation on which to weather crises. The time to act is now."

A 1992 Act regarding the GSEs' safety and soundness prescribed both minimum leverage capital and a highly prescriptive risk-based capital requirement. The Housing and Economic Recovery Act of 2008 (HERA), which amended the 1992 act, gave FHFA greater authority to determine the capital standards for the Enterprises.

FHFA said it is asking for comments as it has begun the process to end the conservatorships. This is a policy change since the 2018 proposal was drafted and there was an assumption that the conservatorship could endure indefinitely. This may have informed the comments and perhaps even the decision to comment at all. FHFA proposes to increase the quantity and quality of regulatory capital to ensure each GSE can provide stability and assistance of the secondary market, especially during periods of financial stress. It is also proposing changes to mitigate the pro-cyclicality

The proposed rule maintains at its core the mortgage-risk sensitive capital framework of the 2018 proposal, backstopped by a leverage ratio requirement, with enhancements in four key components:

1.          Quality of Capital - The quality of regulator capital includes supplemental requirements based on the U.S. banking framework's definitions of capital. These should help mitigate the weaknesses in the GSEs' requirements that became evident in the 2008 financial crisis.

2.          Quantity of Capital - Enhancements to strengthens the quantity of regulatory capital include:

3.             Addressing Pro-cyclicality - The proposed rule includes the following key changes to address concerns with the significant pro-cyclicality of the aggregate capital requirements of the 2018 proposal:

4.          Advanced Approaches - The proposed rule includes requirements for the GSEs to assess their own credit, market, and operational risks. They must take responsibility for measuring and managing the risks they take and hold sufficient capital to stand behind those risks. Accordingly, FHFA's standardized capital requirements, set largely through various grids, multipliers, and other formulas, should serve as a safety and soundness backstop to the advanced approaches.

The comment period will extend for 60 days after the proposal is published in the Federal Register. A link to the proposal is available at httpss://www.fhfa.gov/Media/PublicAffairs/Pages/FHFA-Releases-Re-Proposed-Capital-Rule-for-the-Enterprises.aspx