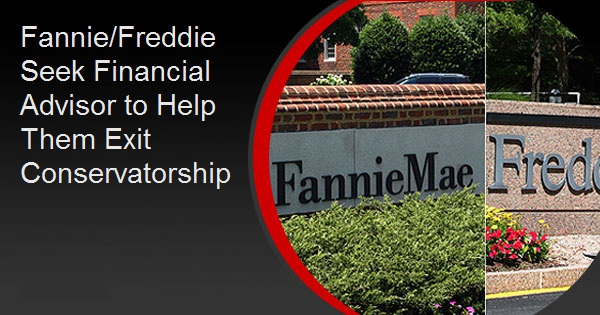 Fannie Mae and Freddie Mac (the GSEs) have taken what each is calling an important step toward ending their 12 years of operating under conservatorship. Each has announced they are about to issue a request for proposals (RFP) to secure a financial advisor to facilitate that move.

In a press release, Freddie Mac said the advisor selected will "advise the company on a range of issues, from capital considerations to the company's business plan, and may ultimately play a role in any potential recapitalization transactions in the future"

The GSE's were put into conservatorship in August 2008 as losses mounted from defaulted mortgages they had guaranteed. The Treasury Department then gave them access to billions of dollars in operating capital in return for an equal amount of their senior preferred stock. Over the ensuing years the two have paid dividends on that stock far in excess of what they borrowed but have not been allowed to redeem the stock nor retire any of the debt.

One of the main sticking points to ending the conservatorship is the need to capitalize the companies, which until recently have not been allowed to retain any of their profits. Common and preferred stock issued before the conservatorship is still actively traded. Among the recent proposals has been a massive public offering of stock, either with or without wiping out existing stockholders.

Freddie Mac CEO David Brickman said, "Even as we work to stabilize the housing markets during this unprecedented pandemic, Freddie Mac has remained focused on exiting conservatorship responsibly. Today we begin the competitive selection process for a financial advisor that will ultimately facilitate our return to full private capital ownership. This is a significant milestone, and we look forward to making a thoughtful selection quickly."

"While we are fulfilling our mission and helping to keep people in their homes during this national emergency, we also remain committed to ensuring a responsible exit from conservatorship," said Hugh R. Frater, Chief Executive Officer, Fannie Mae. "Today's announcement is a significant step on that path, and we look forward to making a timely selection in the competitive process."

At this writing there has been no announcement from the conservator, the Federal Housing Finance Agency (FHFA) about the RFPs. However, Fannie Mae points out that, "Engaging a financial advisor is an important milestone in meeting Fannie Mae's 2020 FHFA scorecard objective to prepare a responsible transition plan for a potential exit from conservatorship."