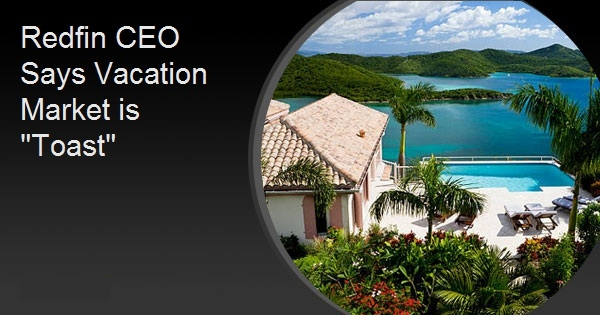 IBuyers, that new label for real estate agencies that buy homes from sellers rather than just listing them, are back in the hunt. Redfin announced late last week that its RedfinNow subsidiary was about to resume operations, joining Opendoor and Offerpad which have already reopened after COVID-19-driven shutdowns. Zillow has said it would gradually relaunch its Zillow Offers division in upcoming weeks.

But Redfin CEO Glenn Kelman made a more startling statement as well. In an interview with Jacob Passy published in MarketWatch, he declared that vacation markets are "toast," and AirBnb owners are rushing to unload their properties. They are going too be in tough shape, he said. "There's a whole economy that was built around the liquidity there that Airbnb provided. You could get pretty deep into debt and still have somebody pay your mortgage every month because Airbnb and other travel websites were so good at finding someone to rent it out. And I don't think many of those folks have the reserves that Marriott or that Hilton does."

Kelman said Redfin's tech offerings, such as virtual home tours and open houses will help it during the pandemic and that, while buyers and sellers may be coming back to the market, the speed of recovery is far from certain. They are opening their RedfinNow division because it still seems to be a reasonably good time to own a house. Inventory is down about 25 percent compared to a year ago, but the demand is almost back to pre-pandemic levels. While the company is willing to take a risk, it will probably lower its offering prices just to give it more margin for error.

He said his company and others as well would probably be less willing to take on a house that could turn into a major project. One always had to account for the possibility of a downturn between buying and selling, but actually going through it means less appetite undertaking a transaction where it might take six months to figure out if you offered the right price.

"If you took a basketball shot, and six months later somebody told you whether it went into the hoop, you'd never get to be a better basketball player, right? So, I think we're just being more disciplined about the kinds of homes we buy. If  you make a mistake on five houses, you should not buy 5,000.

He is unsure whether the pandemic will make the iBuying concept more popular even though it eliminates a lot of the face-to-face interactions of real estate. He thinks all iBuyers are going to price risk into their offers and he doesn't know if sellers are going to accept that.

He sees resurgence of demand but says it is a bifurcation of the American dream. It has become a privilege and many of the privileged class have fared better in the pandemic than people who work in restaurants and provide other in-person services. "Unemployment is going to be bad for one part of America; for another part, it isn't as bad. And so that's the part that's buying a house," he said.