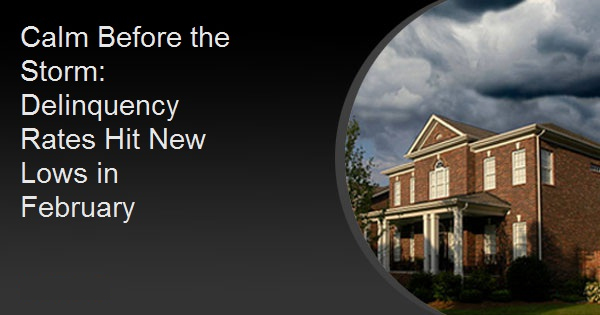 CoreLogic's Loan Performance Insights Report has shown only incremental changes, primarily declines, in most of its measures of delinquency. The most recent report, covering February, is more of the same, marking the 26th straight month that delinquency rates have fallen, and most are now at record lows. However, the company says it expects, starting with the March report, that those measures will begin to move higher and that "we could see increases in serious delinquencies as high as four-fold by the second half of 2021."

CoreLogic said the national delinquency rate, mortgages that were 30 days or more past due including those in foreclosure was 3.6 percent in February. This was down 0.4 percentage points from February 2019.

With unemployment rates at record highs due to the COVID-19 pandemic, homeowners are at an increased risk of becoming delinquent in the coming months - with the risk for borrowers in negative equity being even higher. The share of homes that are underwater, owing more on their mortgage than the value of their home, fell to 3.5 percent at the start of 2020, but slowing price increases over the next few months could increase that share. States with disproportionate numbers of underwater homes are most at risk for increases in delinquencies. That would include Louisiana, Connecticut, and Maryland

"Delinquency and foreclosure rates were at a generational low in February as the U.S. unemployment rate matched a 50-year low," said Dr. Frank Nothaft, chief economist at CoreLogic. "However, the pandemic-induced closure of nonessential businesses caused the April unemployment rate to spike to its highest level in 80 years and will lead to a rise in delinquency and foreclosure. By the second half of 2021, we estimate a four-fold increase in the serious delinquency rate, barring additional policy efforts to assist borrowers in financial distress."

The early stage delinquency rate (loans 30 to 59 days past due) was 1.8 percent in February, down from 2.0 percent a year earlier and the rate for those 60 to 89 days past due was 0.6 percent, unchanged on an annual basis. Serious delinquencies, loans 90 ore more days past due including those in foreclosure, accounted for 1.2 percent of all loans, the lowest rate since June 2000. The foreclosure inventory, loans in the process of foreclosure was unchanged at 0.4 percent, in a tie for the lowest rate since January 1999.

"After a long period of decline, we are likely to see steady waves of delinquencies throughout the rest of 2020 and into 2021. The pandemic and its impact on national employment is unfolding on a scale and at a speed never before experienced and without historical precedent," said Frank Martell, president and CEO of CoreLogic. "The next six months will provide important clues on whether public and private sector countermeasures -current and future - will soften the blow and help us avoid the protracted, widespread foreclosures and delinquencies experienced in the Great Recession."