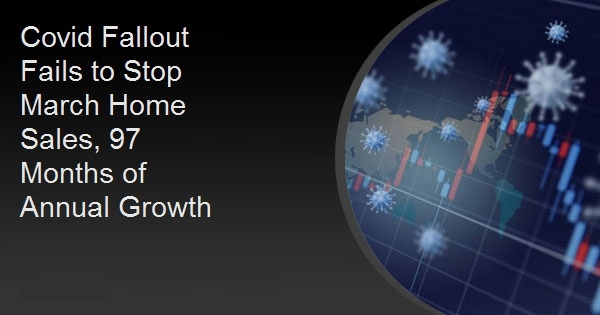 Existing home sales fell back last month from their unexpectedly good performance in February, but still maintained their long record of annual increases. The National Association of Realtors® (NAR) said sales of previously owned single-family houses, townhomes, condos, and cooperative apartments were at a seasonally adjusted annual rate of  5.27 million units in March compared to 5.77 million units in February. The 8.5 percent decline followed a 6.5 percent increase in February and despite the decline, overall sales increased year-over-year for the ninth straight month, rising 0.8 percent from the annual rate of 5.23 million sales in March 2019.

Sales stayed well within the range of analysts forecasts collected by Econoday. They ranged from 4.50 million to 5.95 million with a consensus of 5.35 million.

Single-family home sales retreated by 6.8 percent from the 5.16 million in annual sales posted in February to 4.74 million in March. This was a 1.3 percent edge over sales the previous March. Existing condominium and co-op sales were recorded at a seasonally adjusted annual rate of 530,000 units in March, down 11.7 percent  from February and 3.6 percent lower on a year-over-year basis.

"Unfortunately, we knew home sales would wane in March due to the coronavirus outbreak," said Lawrence Yun, NAR's chief economist. "More temporary interruptions to home sales should be expected in the next couple of months, though home prices will still likely rise."

And those prices do remain strong. The median existing-home price for all housing types in March was $280,600, up 8.0 percent on an annual basis. March's national price increase marks 97 straight months of year-over-year gains. The median existing single-family home price was $282,500, also an 8.0 percent rate of increase. Existing condo prices gained 7.9 percent to a median of $263,400.

The inventory of available homes rose 2.7 percent from March to 1.50 million units, a 3.4-month supply at the current pace of sales compared to 3.0 months in February. In March of 2019 the inventory was 10.2 percent larger at 1.67 million. The absorption rate at that point was estimated at 3.8 months.

"Earlier in the year, we watched inventory gradually tick upward but with the current quarantine recommendations in place, fewer sellers are listing homes, which will limit buyer choices," Yun said. "Significantly more listings are needed and more will come on to the market once the economy steadily reopens."

NAR's most recent flash survey of its members showed that 93 percent of sellers had changed behavior to help the homebuying transaction move forward with social distancing and necessary precautions.

Fifty-two percent of homes sold in March were on the market for less than a month.

"Despite the social distancing restrictions, with many Realtors conducting virtual open home tours and with mortgage rates on the decline, a number of first-time buyers were still able to purchase housing last month," Yun said.

Realtors during these unpredicted, trying times," said NAR President Vince Malta. "We have played an instrumental role on Capitol Hill as Congress secured multiple federal relief packages, and we will continue fighting on behalf of our 1.4 million members, American consumers and the nation's economy as these conversations persist."

"We have seen an increase in virtual home tours, e-signings and other innovative and secure methods that comply with social distancing directives," Malta continued. "I am confident that Realtors and brokerages will adapt, evolve and fight, ensuring the real estate industry will be at the forefront of our nation's upcoming economic recovery."

Sales in all four major regions were lower than in February although the Midwest and the South held on to year-over-year gains. Existing-home sales in the Northeast fell 7.1 percent to an annual rate of 650,000 and were 3.0 lower than a year earlier. The median price in the Northeast was $300,400, up 8.3 percent from March 2019.