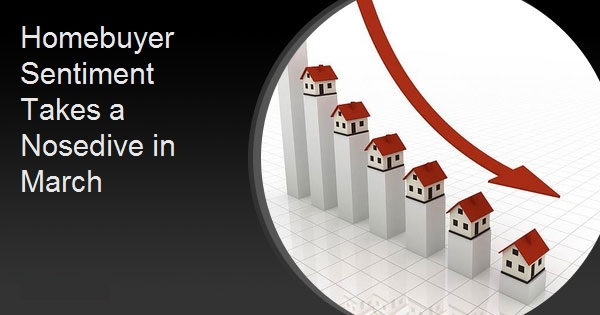 American's attitudes regarding buying and selling homes and about their own financial outlook made an abrupt U-turn last month and Fannie Mae's Home Purchase Sentiment Index (HPSI) wiped out more than three years of gains. The index, a distillation of responses to six questions from the monthly National Housing Survey (NHS) lost 11.7 points, falling to 80.8 in March.

Five of the six index components declined both from February and compared to March 2019, with four falling from the earlier surveys by double digits. This sent the HPSI falling to its lowest reading since December 2016 and down 9.0 points since March 2019.

One of the most resilient components of the index has been the question regarding job security. Respondents who say they are not concerned about losing their job has consistently stayed in the upper 80 percent range for several years. In March it dropped to 77 percent and net positive responses plummeted 18 percentage points to 54 percent.

The net percentage of those who expect further increases in home prices fell 22 points from February and 22 points year-over-year to a net of 17 percent with 39 percent thinking prices would rise and 22 percent expecting them to fall. The balance thought there would be no change.

The percentage of Americans who say their household income is significantly higher than it was 12 months ago decreased from 32 percent to 27 percent and that 5-point decline was reflected in the net which fell to 16 percent.

"In March, the HPSI dropped to its lowest level since December 2016, with Americans reporting greater concern about their job security than at any point in the last six years," said Doug Duncan, Senior Vice President and Chief Economist.

"Attitudes about the current home-selling environment deteriorated markedly, falling to their lowest level since January 2017. A survey record one-month drop in optimism about the direction of the economy appears to have weakened consumers' views of both the current home-selling and homebuying environment, though the latter is likely buffered in part by low mortgage rates. When asked why it's a bad time to buy or sell a home, approximately 7 percent of consumers offered COVID-19 as an unprompted response, one of the highest percentages of non-standard answers in the survey's history. We expect these developments to weigh heavily on housing activity during the spring/summer homebuying season."

The NHS, from which the HPSI is constructed, is conducted monthly by telephone among 1,000 consumers, both homeowners and renters. In addition to the six questions that are the framework of the index, respondents are asked questions about the economy, personal finances, attitudes about getting a mortgage, and questions to track attitudinal shifts. The March survey was conducted between March 1, 2020 and March 22, 2020. Most of the data collection occurred during the first two weeks of this period.