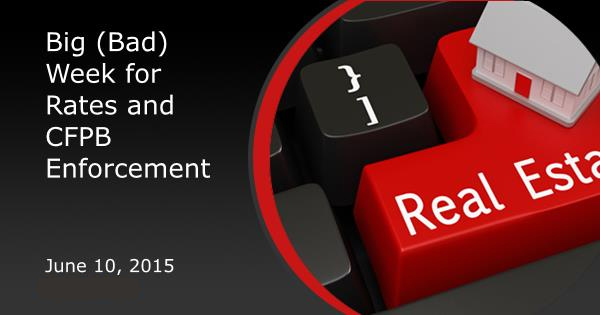 This week was staggeringly busy on several fronts.  Financial markets snapped back from a lull at the end of May, catapulting mortgage rates to new 2015 highs after Friday’s Employment Situation Report.  30yr fixed rates are now well into the 4’s, which is an abrupt move after being as low as 3.625% in April.

Before that, things were already off to a bad start as the week’s economic data was generally strong (rates tend to rise when economic data is stronger than expected) and Fed speakers were generally more supportive of a rate hike in 2015.

Beyond the data, bigger-picture volatility continues to be driven by European events.  While a lot of attention is paid to the possibility of a debt-restructuring for Greece, this is only a small part of the problem.  The bigger issue is actually quite simple: market participants are concerned that early 2015 marked long term lows in European interest rates.  In fact, they’re concerned that too many investors were piled into the camp that had been pushing European rates and the European currency lower.

That fear was validated on Wednesday when European Central Bank (ECB) President Draghi passed up an opportunity to re-commit to his bond-buying timeline.  Long story short, if European bond buying isn’t a sure thing for a predetermined amount of time, a lot of investors will get rid of the bonds they were planning on selling to the ECB, and that’s exactly what’s been happening since late April.  When investors are aggressively selling bonds, interest rates increase.   A big enough move in Europe almost always translates to a similar, but smaller move in the US.

Friday’s employment data was another vote for the same selling in bond markets.  It was much stronger than expected, leading investors to conclude that a Fed rate hike would come sooner rather than later.  While the Fed Funds Rate doesn’t directly dictate mortgage rates, they are connected enough that we saw a significant move higher.

The calendar of events calms down significantly next week, but the following week brings an important Fed Announcement.  Without  much data to guide markets in the coming week, we could see another “lull” as markets prepare for an even bigger move in the following week.