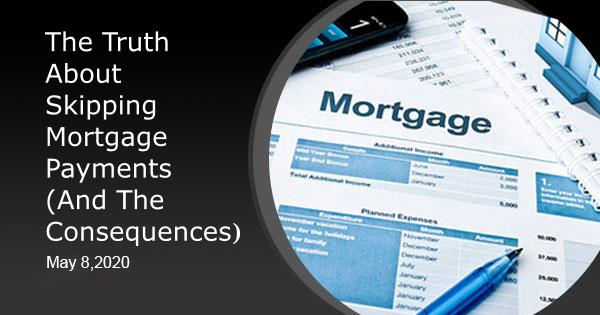 The Truth About Skipping Mortgage Payments (And the Consequences)

Every professional in the housing/mortgage market understands the crushing economic changes for many households as a result of coronavirus.  It makes all the sense in the world for those households to pursue the forbearance option (skipping mortgage payments for 180-360 days) if needed.  But it may make considerably less sense for those who aren't truly in need.  Either way, the decision should not be taken lightly and its consequences are already being felt.

The CARES Act requires that mortgage servicers grant forbearance without verifying need.  In other words, if you say you have a financial need, your mortgage company can't ask you to document it.  This has resulted in a much bigger surge in mortgage non-payment than the industry expected.

When people don't pay their mortgage, the fallout is a bit different than most other things in life.  For instance, if I loan you $100 and you don't pay me back, I'm out $100!  If you gave me some collateral, I could sell that and try to recoup some of that $100 of course, but I'd still come up short--especially when factoring in time and energy.

The investors fronting money for mortgages don't have to worry about getting repaid.  There are guarantees in place for that from housing agencies (Fannie Mae and Freddie Mac, primarily).  But those guarantees only mean the investor will get the principal and interest they otherwise would have received for the time the mortgage existed.  They DO NOT protect the investor from other expenses that can arise when a homeowner isn't making payments.

That's typically not too big of a concern because the risk of non-payment is low and stable enough that it can be easily managed.  With the risk now higher than ever and without knowing how long the situation will last, uncertainty reigns supreme among mortgage investors.  Uncertainty has a cost.

For instance, the housing agencies that guarantee a majority of mortgages are now charging 7% of the loan balance to lenders when new loans enter forbearance status too soon after closing.  The time window can be as long as 6-8 weeks in some cases.  In other words, the lender loses $21,000 on a $300,000 loan.  Such costs quickly add up to insolvency for some lenders.

The investors who buy mortgages are accounting for these new risks by charging higher rates and fees, or by simply ceasing to offer certain loan programs altogether.  The greater the number of forbearance risk factors, the higher you can expect the rate to be, EVEN IF you personally don't agree that the risk factor applies in your case.

Moreover, the industry's definition of "risk factors" might surprise you.  Case in point, housing agencies won't buy/guarantee cash-out loans at all if there's been early forbearance, even with the 7% penalty).  Rather than run the risk of getting stuck with a mortgage that can't be sold to or guaranteed by the housing agencies, many investors simply aren't doing cash-out mortgages right now.  Most of those who remain in the game are charging extra fees and/or higher rates.  That means that a borrower with an 800 credit score who wants a cash out loan for half of their home's value (a stellar credit risk historically) would still pay a much higher rate.

To a large extent, this would be happening regardless of the people opting for forbearances who don't really need them.  But those people are certainly making things worse for everyone else.  They're also making it worse for themselves.

If we look beyond the impact on rates and program availability, there are other reasons a homeowner should think twice before requesting a forbearance they don't need.  As the guidelines currently stand, there is no guarantee that they'd be able to refinance or get a new mortgage with forbearance on their credit report--especially if the forbearance is ongoing.

This is a head-scratcher for those who've followed the forbearance and CARES Act news reasonably closely, because the law states that there is to be no adverse credit reporting as a result of forbearance.  While it is true that forborne payments will not be reported as late, the forbearance itself is still reported, and that's obviously a red flag for the mortgage industry as long as the CARES Act's guidelines remain intact.

In terms of credit scores, it is true that forbearance will not DIRECTLY impact someone's FICO, but there's no way to prevent it from having an indirect impact in some cases.  For instance, certain creditors are lowering available revolving credit limits in the event forbearance shows up on a credit report.  This increases the ratio of debt to available credit, which is a key ingredient in determining FICO score.

In other words, even though the forbearance itself is not affecting FICO scores, it can lead other lenders to make changes that cause scores to drop, and it can absolutely hurt your ability to buy/refi in the future.  Could that be clarified to your advantage in the future?  Certainly, but it's important to know that's not the way it is right now.