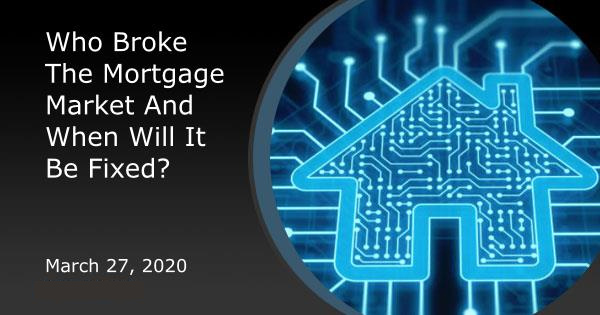 Who Broke The Mortgage Market And When Will It Be Fixed?

There's been no shortage of crazy weeks in the mortgage market lately, and this one was not to be outdone.  By the end, the prices of the bonds that normally determine mortgage rates surged well into record highs.  That would normally suggest the lowest mortgage rates ever, but the average lender is nowhere close.

In fact, many types of loans moved inexplicably higher in rate.  Some variations of certain loan types were completely discontinued or simply priced so poorly that no one would want them.  Several lenders stopped taking new applications.  Multiple lenders made significant changes to their product offerings. A few lenders closed their doors to new business indefinitely.

The issue is bigger than one specific sector of the market.  Even the mega banks ditched some of their product offerings and jacked rates up on mainstream programs such as FHA/VA.  In fact, even the venerable 15yr fixed conventional conforming loan fell victim to counter-intuitive movement relative to mortgage bond prices.

The mortgage industry, like many others, is dealing with more than one problem right now.  And like many other industries, the problems arose not from some inherent wrongdoing or mismanagement, but from the most abrupt and unexpected economic adjustment the world has ever seen.  The consequences have been obvious for financial markets, and mortgage bonds are no exception.

You've already heard about the massive stock losses in Feb and March.  This coincided with massive bond market gains.  Mortgages are part of the bond market and gains typically mean lower rates.

Due to the abrupt adjustment to the economic outlook, the bond market (which thrives on drama, doubt, and worry) improved so much so quickly that it was too much of a good thing for the mortgage side of the bond market.  "How could rates be too low?!" you may be wondering.

Investors who buy mortgages are planning to make money on interest paid over time.  They pay more than the principal loan amount upfront for the right to collect that interest.  They carefully calculate what they're willing to pay based on how long they think people will keep their loans.  If rates fall faster and farther than expected, lenders are suddenly getting their principal back without earning a profitable amount of interest.

If this "farther/faster" trend toward lower rates persists, investors pay less and less for mortgages.  This recently resulted in mortgage rates moving higher after hitting all-time lows while other rates plummeted well below previous all-time lows.

Just as mortgage investors were pulling back due to refi fears, the entire financial market was frantically trying to sell everything it could in order to raise cash.  This isn't "raising cash" in the sense of drumming up funding for some new venture.  This is a run on the metaphorical bank in response to a crisis.

Fastest global economic correction in history?  Investors start knocking on the wrong doors in search of cash, like this guy in The Fifth Element. 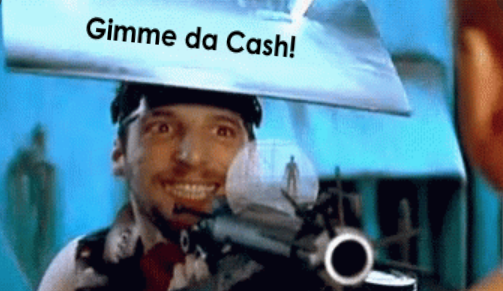 Excess selling pressure causes prices to fall, and bond prices move inversely to rates.  This is why mortgage rates jumped higher at the fastest pace in history 2 weeks ago, even as 10yr Treasury yields remained at levels that convinced many savvy borrowers that mortgages should be doing much better.

At the same time, battles were being fought behind the scenes.  Market volatility put lenders and  investors at odds as to who owed whom at any given moment.  Massive move lower in bond prices?  Investors owed lenders.  Massive move higher?  Lenders owed investors.  This loosely describes the market phenomenon known as a "margin call." They've been happening with staggering size and frequency, thus placing an even higher premium on cash.

All of the above added up to a major threat to the bond market's ability to provide credit.  That's a complicated way of saying people and businesses and banks were at risk of not having the cash needed to meet their obligations or goals.

To use a simple example, let's say you remodeled your home with a credit card and then were expecting to quickly get a refinance to pay off the debt, but due to the cash crunch in the bond market, your loan was heavily delayed or not possible at all.  You'd now be looking at a few high interest payments at the very least.  Maybe that's no big deal to you, but multiply it by the size of the entire financial system and it adds up quickly.

This is precisely why the Fed stepped in with hundreds of billions of dollars of bond buying guarantees and trillions of dollars in short term loans to the biggest banks.   Before you let that "trillion" thing worry you, those "loans" are actually repurchase agreements (aka "repos") that allow big banks to quickly sell non-cash assets to the Fed and agree to buy them back later with cash isn't so tight.

The Fed's buying spree put some much needed upward pressure on mortgage bond prices.  But remember those margin calls?  They'd mostly seen lenders demanding cash from banks.  The Fed's heavy-handed bond buying reversed that trend and lenders were suddenly seeing an unprecedented amount of cash go out the window.  That quickly made them more and more hesitant to take risks (i.e. higher rates and decreased flexibility), and the next big set of problems only made it worse.

The relief bill encourages millions of Americans affected by coronavirus to seek a forbearance on their mortgages (6-12 months of no payments), whether they've lost their jobs or not.  With more than 3 million filing for unemployment this week, that's a much-needed relief, but one that will put unprecedented strain on the mortgage market.

Although the Treasury Department formed a task force to come up with a solution, the final relief bill doesn't explicitly say it will help servicers make ends meet, and they're going to need A LOT of money to cope with the onslaught of forbearance requests.  We can assume they will get access to some sort of lending facility from the Fed or Treasury, but they're still looking at the need to pay back funds by resuscitating loans that may not come back to life.  Either way, these loans will be less profitable.

As such, lenders have quickly pulled back from making certain loans with the highest risks to profitability.  That's not to say they only care about profit, by the way.  Lenders WILL continue to offer financing to people who need it.  But at the moment, it's very hard for them to know how to assign cost/value to the riskier edges of the mortgage market credit spectrum.  They need time and information in order to put precious cash on the line in extraordinarily uncertain times.  A miscalculation could cost them the ability to continue lending altogether!

This isn't just a problem for the riskiest loans.  Even loans that historically perform well such as FHA and VA are suffering because of how they're expected to fare in forbearance plans.  This has to do with rules on how servicers pay investors.  In general, the average FHA/VA loan is on the hook for a larger percentage of the monthly payment than the average conventional loan.

Investors could also be feeling more cautious about FHA borrower demographics, where first time homebuyers with lower cash reserves may be less able to weather a financial storm.  If that makes those borrowers more likely to seek forbearance, it raises questions for investors who are still waiting on answers.  For now, it's simply safer and easier for them to be conservative with their loan offerings.  That means higher rates and less flexibility.

We're about to see what will EASILY be the largest and fastest surge of forbearances the mortgage market has ever seen.  Every loan raises questions.  But due to servicing rules or risk profiles, some loans raise more questions than others.  Those loans have been absolutely demolished by an absence of investor demand.  To reiterate, lower demand among investors = higher rates.

In essence, despite extraordinarily high prices on the bonds that underlie the top tier mortgage debt, much of the mortgage market is broken by the volatility and uncertainty surrounding COVID-19.  Some parts will heal more quickly than others as investors see how things play out.  In all cases, TIME and STABILITY (in markets, the economy, and epidemiology) will be required before rates and product offerings return to where they were.