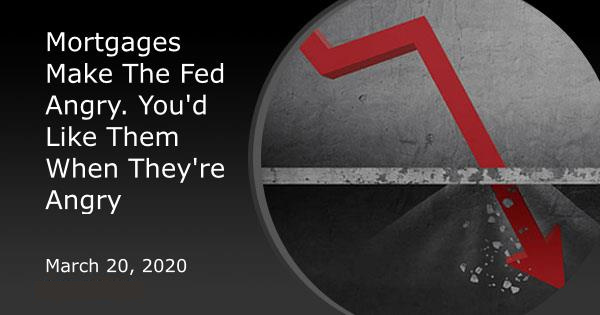 Mortgages Make The Fed Angry. You'd Like Them When They're Angry

Last week was the wildest in the history of the mortgage market.  This week was wilder.  It ended with a one-of-a-kind show of force from the Federal Reserve.

This wasn't necessarily destined to be the case, but things changed dramatically on Wednesday. By then, rates were surging higher for reasons that were hard to comprehend.  True, the Fed cut rates in an emergency announcement over the weekend, but we've already talked about why the Fed rate cut doesn't affect mortgage rates.

The mortgage market was far more interested in the Fed's decision to start buying large amounts of mortgage debt for the first time in years--something that has absolutely made a difference in the past.

This time, it was no use--at least not at first.  Mortgages celebrated briefly on Monday but quickly became inconsolable as the week progressed.  Their biggest issue was a massive glut of supply.

Supply and demand are key considerations for the price of anything.  Mortgages are no exception.  Higher supply (of mortgages) means lower prices paid by mortgage investors.  Lower prices mean higher rates for consumers.  If that doesn't sound logical, remember, that's the price an investor is paying to be able to collect interest on your mortgage.  The less they pay, the more you'll have to.

Recent market volatility and the rapid-onset recession (courtesy of COVID-19 shutting down large portions of the economy) drove a mass liquidation of mortgage debt among certain bond holders.  Investors were eager to shed risk and raise cash.  This was especially true for several key sectors of the mortgage market.  That meant selling mortgage debt... a lot of it!

In fact, the amount of supply was too much for the Fed to handle.  Other mortgage investors may have been able to pick up the slack, but they were conspicuously absent, and not just because they wanted to raise cash.  They were also protesting uncommonly high volatility brought about by the rapid decline in rates in recent weeks.  Excess volatility hurts mortgage valuations, making investors want to offer lower prices.

The net effect was a scary situation where the Fed was throwing money at a mortgage market that not only seemed unwilling to respond, but that was also showing signs of serious distress.  The mainstream data (based on a weekly survey of rates) isn't able to capture the fallout, but the following chart shows just how much damage was being done to mortgage rate availability day-over-day. 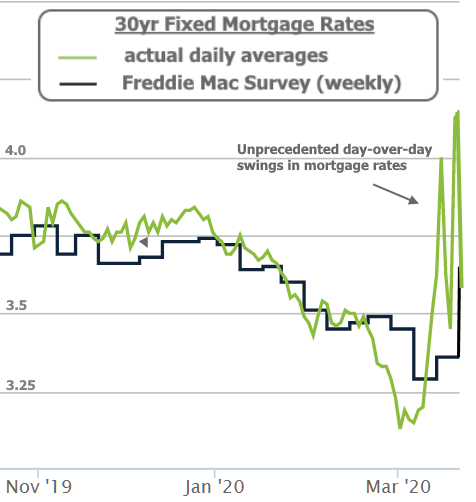 In an attempt to put all this nonsense to rest, the Fed blasted the mortgage market with a surprise announcement on Thursday.  By the end of that day, it would buy more mortgage debt than it had ever bought in a single day.  Surely, this would do the trick!

But no... Mortgage bond holders had more paper to get rid of, and potential buyers were even more reticent than imagined.  Despite bringing out the big guns, the Fed appeared to be losing control of the mortgage market.

Then the Fed got angry.  And you would probably like the Fed when it's this angry.

Remember the Fed's biggest-ever day of mortgage buying on Thursday?  By Thursday afternoon, it announced the following day would be THREE TIMES bigger.  By Friday morning, when the mortgage market wasn't responding enthusiastically enough, the Fed unleashed its fury, adding another $15 billion dollars of purchases, making it FOUR TIMES bigger.  In case that left anything to doubt, the Fed announced it would be back on Monday to do it all again.

This was an astonishing and brutal display of power, the likes of which had never been brought to bear on the mortgage bond market, or even thought possible.  If it didn't do the trick, it's hard to imagine what more the Fed would have done to regain control.

Thankfully, we won't find out.  Friday afternoon saw a restoration of the strong buying demand for mortgages and the defeat of relentless selling pressure.  Simply put, the forces of good (the ones that push mortgage rates lower) prevailed.

This isn't an instant fix for mortgage rate volatility, and it hasn't immediately restored the availability of recently low rates.  But the bonds that underlie the mortgage market are moving quickly in the right direction.  If that continues to be the case in the coming weeks, rates will continue moving back toward those recent lows, creating significant opportunities for those who missed out earlier this month.

A constant COVID-19 caveat is required.  The world is, of course, rapidly changing and many aspects of our lives are in upheaval.  It's impossible to predict every twist and turn in the road ahead for the economy and the mortgage market.  Regulators and service providers are working to adapt to the rapidly changing situation.  Borrowers and loan originators need to have open conversations about those changes and what to expect during the loan process.

On a final note, it goes without saying that there are trying times ahead and fear is rampant.  Let's all be looking for ways to help each other and ask for the help we need.  Let's meet fear with courage, patience, hope, and kindness.