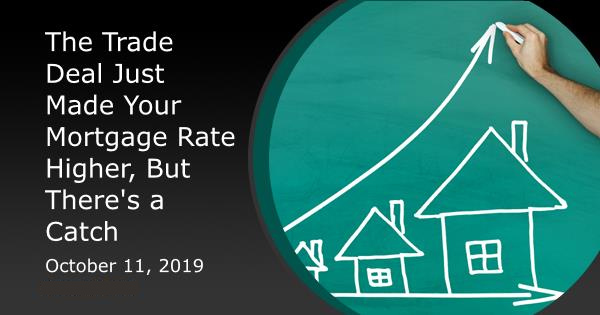 The Trade Deal Just Made Your Mortgage Rate Higher, But There's a Catch

It would have been hard to make it through this week without hearing about Friday's trade deal progress, but how does it affect you?  At face value, a healthy trade partnership is good for the global economy, but if you need a mortgage any time soon,  the trade deal just pushed your rate higher.

Rates actually began moving higher on Wednesday, but Thursday and Friday were especially abrupt as financial markets hurried to get in position for a potential US/China trade announcement.

Why hurry now?  Because this week was the first time China's top trade negotiator met with US negotiators at the White House since May.  Inside sources suggested this would result in at least some sort of progress being announced, even if it was far from a finalized deal.  That's exactly what happened.

This is actually where the "catch" in the headline comes in.  Yes, the trade news hurt rates, but rates were only in a position to be hurt because trade news accounts for so much of 2019's impressive drop in rates.

Long story short, Freddie's survey mainly reflects Monday and Tuesday rates.  So when there's a big move in the 2nd half of the week, the survey can be way off by the time it comes out on Thursday. 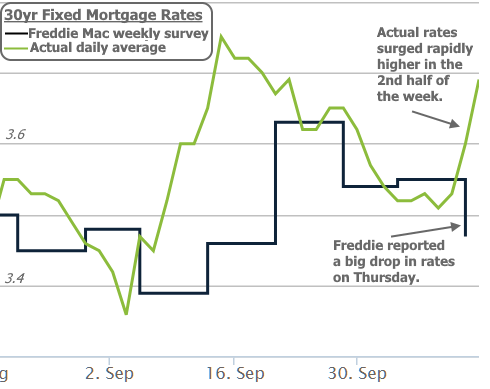 The broader financial market confirms the timing of the volatility, with almost all the drama arriving on Thursday and Friday (the only 2 days that aren't included in Freddie's survey). 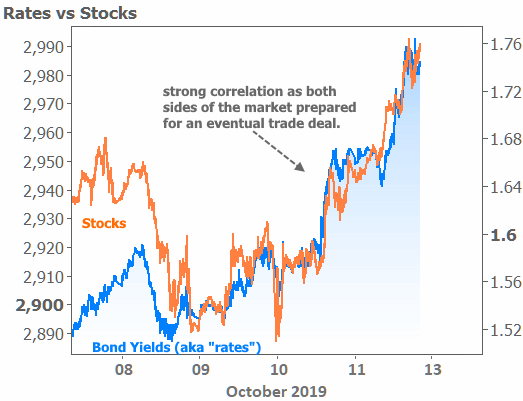 When we examine each of the lines above in a much broader context, we can see a lot of uncertainty.  One of the ways markets express that is with a consolidation pattern, which is just a fancy way of saying that a chart is making higher lows and lower highs.  In other words, the trading range is narrowing. 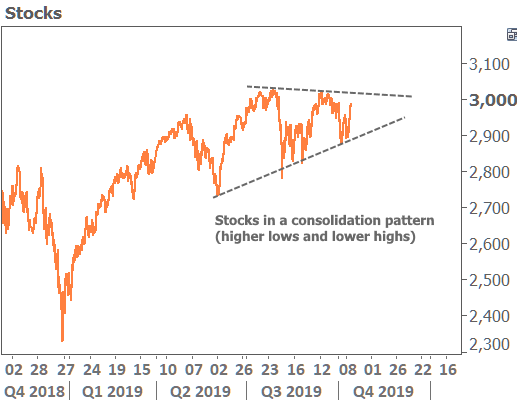 There's no universal rule as to what happens next after a consolidation pattern.  Sometimes, a consolidation is merely a reflection of uncertainty that's followed by...  more uncertainty.  More of than not, however, they suggest bigger moves ahead.  In other words, there's a slightly higher chance that rates will be back on the move after exiting this pattern. 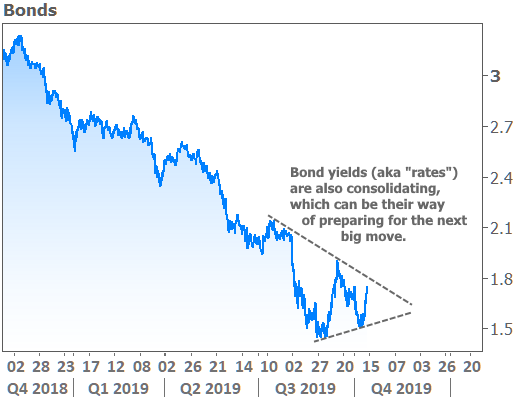 The direction of the move depends first and foremost on the state of economy (weaker economy = lower rates, stronger economy = higher rates).  With that in mind, next week is fairly sparse as far as economic reports are concerned.  The Retail Sales data on Wednesday will be the only heavy hitter on the data front.