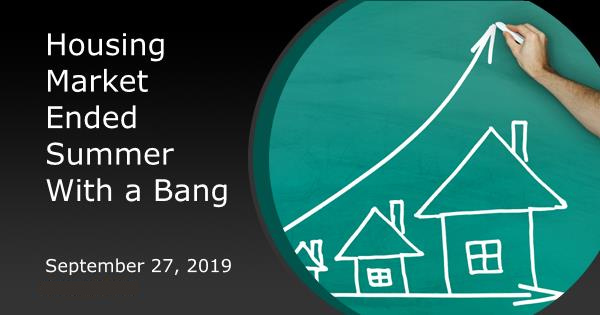 Looking at the calendar (and the weather, depending on where you live), summer may seem like an increasingly distant memory, but for housing market data, things are just heating up.

Whether we're talking about the housing market or almost any other aspect of the economy, the biggest economic reports tend to be released long after the days when the underlying economic activity was actually taking place.  Case in point, among this week's reports was the final GDP figure for the months of April through June!

The housing-related reports released this week are more timely by comparison.  Taken together, they suggest the housing market had a fantastic summer.  The Census Bureau reported a 7.1% surge in New Home Sales for August on top of a revision that increased July's total by 4.8%.  The annual pace of 713k units is very close to a post-crisis high and the 3rd highest in more than a decade. 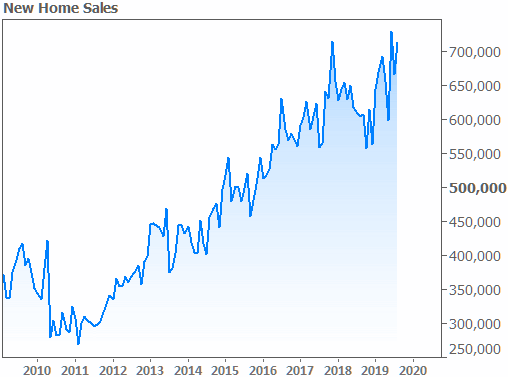 The National Association of Realtors' Pending Home Sales data also spoke to summer ending on a high note for housing.  While the 1.6% increase isn't that impressive, the gains are important as they solidify a recovery from 2018's home sales slump. 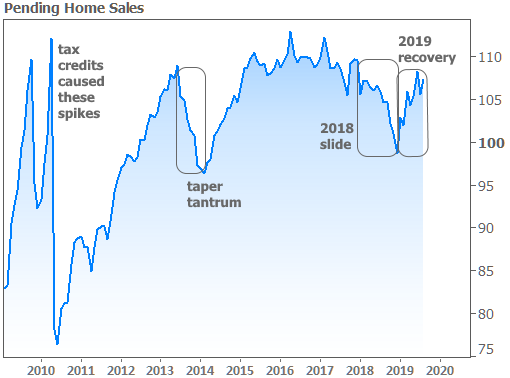 Perhaps even more importantly, this pushes the annual growth rate farther into positive territory  after 18 months in the red, and to the highest levels since 2016. 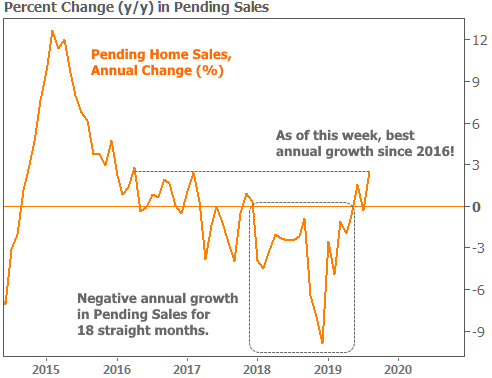 Slightly less timely and slightly more open to interpretation were the two major home price indices, which were updated to cover July as of this week.  Both Case-Shiller and the FHFA agree that home prices are still moving higher in annual terms, but that's about it.  Whereas Case-Shiller said prices were unchanged from June to July and only 3% higher from last year, the FHFA reported a 0.4% monthly increase and a year-over-year total of 5.0%.  Neither report is necessarily better than the other.  They just have slightly different methodologies. 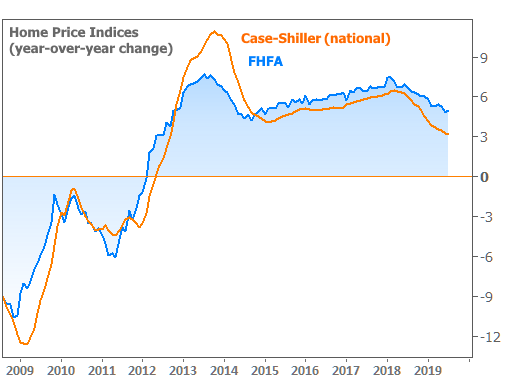 Discrepancies aside, the merits of annual home price appreciation of  3% versus 5% are debatable.  On the one hand, higher home values are generally good for the housing market, but a SUSTAINABLE pace of improvement is also important.  With other economic reports showing inflation running between 1.8% and 2.4%, the lower of the two home price reports may arguably be the better news, as long as it's not flashing a warning about further deceleration in price growth.

2019's big drop in mortgage rates could certainly help with that.  The cost of financing is a huge but stealthy factor in home price appreciation.  It definitely played a role in 2013's deceleration (seen in the chart above).  Then, falling rates in 2014 helped momentum shift back in the other direction.  Notably, rates had been falling for at least 9 months before the home price data showed any effects.  If history repeats itself, that bodes well for home prices at least being able to avoid much more deceleration, all other things being equal.