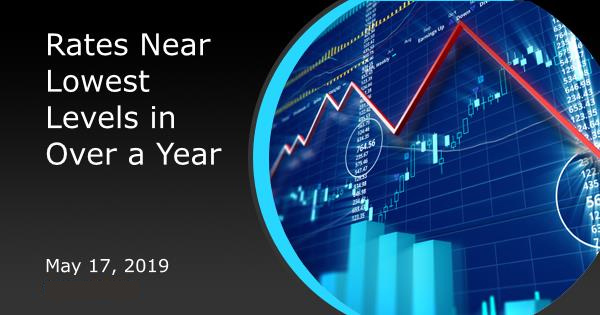 Rates Near Lowest Levels in Over a Year

Last week saw an unexpected drop in rates as trade war headlines rocked financial markets. Things looked set to calm down this week, but the drama continued. This time around, mortgage rates were able to keep slightly better pace with the broader bond market. The result is a return to levels that are very close to the lowest in more than a year.

What do we mean by "keep better pace with the bond market?"

There are many different kinds of interest rates based on many different underlying assets.  It's a common misconception that mortgage rates are based on US Treasury yields.  While certain adjustable rate mortgages can use the US government bond market as an index, the most prevalent mortgage--the 30yr fixed--is actually based on a mortgage-specific bond known as a mortgage-backed security (MBS).

There's good reason for the misconception though!  MBS yields tend to follow Treasury yields in almost perfect proportion.  The chart below overlays MBS yield movement with 10yr Treasury yields.  As you can see, they're frequently almost indistinguishable. 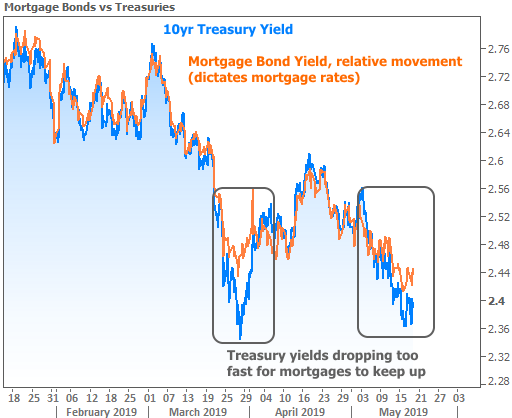 The highlighted portions of the chart show a common phenomenon.  When rates really get on a roll, the mortgage market can struggle to keep pace.  We saw this in late March and again in the past few weeks.  The net effect is that mortgage rates haven't yet returned to the same late-2017 lows seen in 10yr Treasury yields. 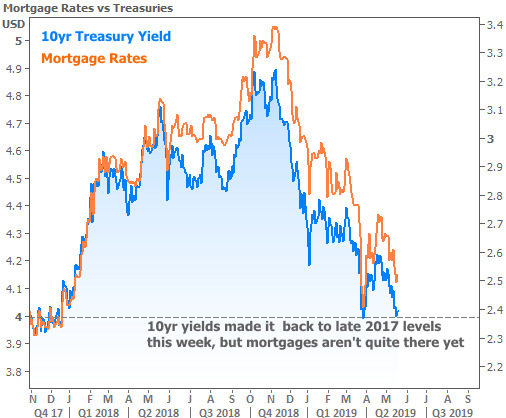 If the move in mortgage rates still looks pretty good to you, you're not alone.  At the lowest point of the week, rates were extremely close to the lows seen at the end of March.  Those were the best levels in well over a year.

The favorable interest rate environment is not lost on housing!  While it certainly doesn't hurt that we're in the throes of the Spring/Summer homebuying season, low rates are definitely helping to prolong a nice rebound in homebuilding, sales, and sentiment.  Both the NAHB housing market index (builder confidence) and Housing Starts (new residential construction) data came out this week, and both added to the trend leading back up from late 2018 lows. 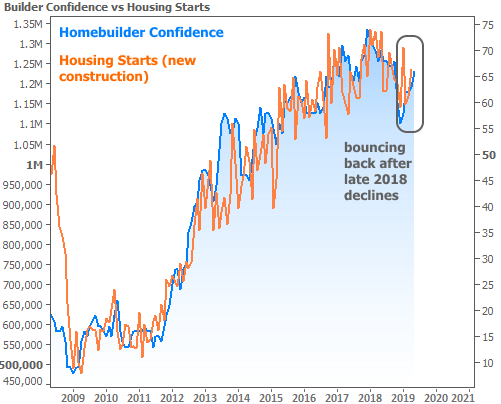 As for the market moves underpinning the low rate environment, this week was more diverse compared to last week's heavy dose of trade war news.  Granted, there were still several trade-related headlines moving stocks and bonds this week, but rates specifically benefited from a clash between Italy and the EU over the country's proposed budget on Wednesday.  Later that same day, US Retail Sales data came out much weaker than expected.  After a modest correction on Thursday, more US/China trade headlines kept bond yields and interest rates from rising.

In the slightly bigger picture, however, it continues to look like the most volatile reaction to the trade war flare-up has come and gone as of last week.  The net effect is that stocks and bonds look like they're trying to move back in the other direction (i.e. higher).  This is even more apparent in stocks.  Bonds probably would have followed had it not been for the Italian news and the weak economic data (both of which have a more pronounced effect on the bond market whereas trade war headlines were equal opportunity market movers). 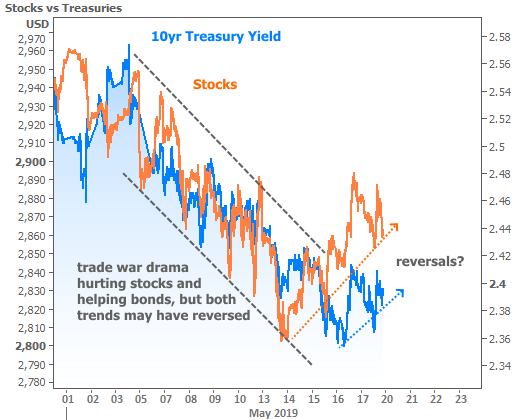 Next week is fairly light on economic data with only few reports worth mentioning (New Home Sales, Existing Sales, and Durable Goods Orders).  In addition to the data, we'll also get the Minutes from the most recent Fed meeting, which will give markets a bit more context for the Fed's current line of thinking.  That would normally be a bigger potential source of volatility, but numerous Fed members have been on the speaking circuit with a fairly unified message about keeping rates steady and needing to be "patient" before deciding if the next move is a cut or a hike.

Finally, the week will be cut short for an early close on Friday and a 3 day weekend for Memorial Day.  Weeks leading up to major holiday weekends are often idiosyncratic from a trading standpoint.  In other words, we may have to wait until the following week to get a clearer sense of the prevailing interest rate momentum.