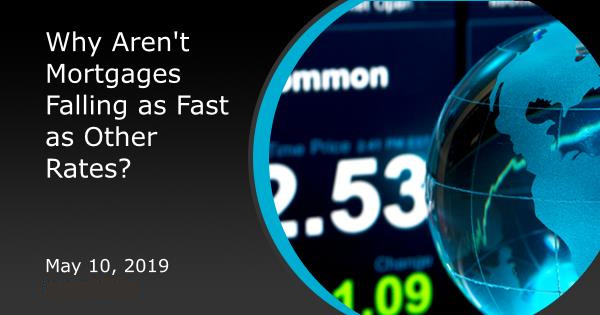 Why Aren't Mortgages Falling as Fast as Other Rates?

Before we get to the finer points of Treasuries vs mortgage rates, let's recap this week's reaction to various trade-related headlines.  There's no question that volatility increased in a major way, as can be seen in VIX chart below. 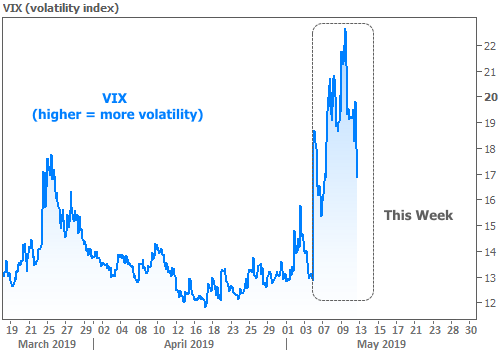 The big spike right out of the gate suggests that markets were reacting to news that hit over the weekend.  Indeed, the culprit was a set of Trump tweets about raising tariff's on Chinese goods.  Combined with a story from the Wall Street Journal suggesting China was considering "pulling out of trade talks," the message to markets was clear: something had gone wrong in the trade negotiation process.

Generally speaking, a trade deal between the US and China is almost universally viewed as good for global financial markets as well as the economies of both countries.  Economic strength tends to coincide with higher stock prices and bond yields.  As such, it was no surprise to see stocks and bond yields fall as trading began for the week.

From there on out, markets were transfixed by trade war drama.  Here's a quick recap of the highlights and the corresponding logical impact on stocks/bonds ("bonds" = "bond yields" in this list). 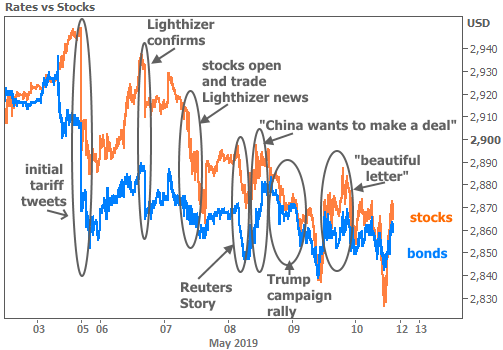 Before this fairly wild week, it looked like rates had decided to move higher after being unable to break below key levels last week due to Fed Chair Powell's press conference on Wednesday.  Stocks didn't love what they heard from Powell but were nonetheless able to hold near all-time highs.

Powell aside, stocks and bonds were both moving gradually higher anyway.  Viewed in the bigger picture, this week's trading resulted in a fairly obvious reversal of those trends. 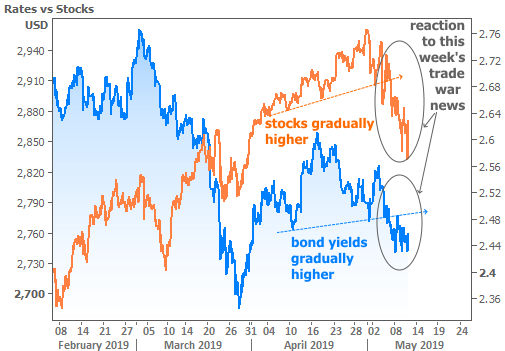 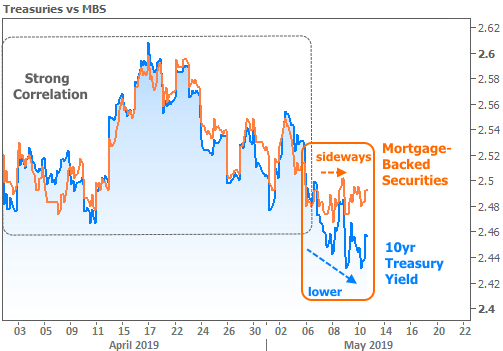 While it is very true that Treasuries represent the benchmark/core of the US interest rate market, and also very true that mortgages tend to correlate almost perfectly with Treasury movement, there are notable exceptions.  Mortgages are actually driven directly by mortgage-backed securities (MBS).  Simply put, these are bonds composed of groups of mortgages for the purpose of managing risk and providing liquidity among mortgage investors.

Because the government took control of the two biggest issuers of MBS during The Financial Crisis, MBS returns are just as guaranteed as Treasury returns.  If that were the only thing investors cared about, MBS would always move in lock-step with Treasuries.

But MBS are subject to a huge variable that Treasuries never have to worry about: human behavior.  Whereas the government will pay the agreed-upon yield on a Treasury security as long as it lasts, a mortgage borrower will only pay the agreed-upon yield (aka "interest") as long as they have their mortgage.  For a variety of reasons, they may decide to move or refinance.  When that happens, the investor is no longer receiving the stream of payments with interest that it signed up for.

The early retirement of a mortgage is referred to as "prepayment" in the secondary market, and it goes hand in hand with another MBS buzz word: "speeds."  This simply refers to the speed at which certain vintages of MBS are being paid off.

To make a long story short, the monthly prepayment report showed a drastic increase in speeds early this week.  This suggested MBS were a bit overvalued relative to Treasuries, and a logical correction ensued (even though it seemed paradoxical on the surface).

The good news is twofold.  First, the correction is over for now and in fact, mortgages outperformed Treasuries on Friday.  But more importantly, this was only ever cause for concern when looking at rate movement under a microscope.  Both mortgage rates and Treasury yields are operating very close to the lowest levels in more than a year. 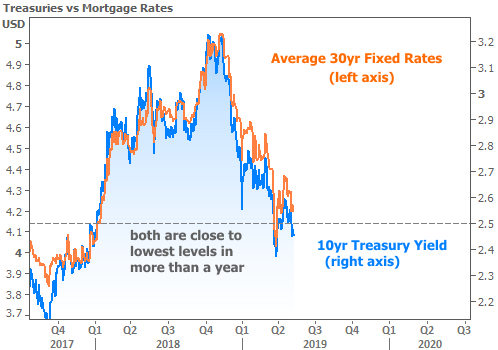 The week ahead should be telling for markets as traders are able to get back to business following this week's trade war diversions.  Economic data will return after being mostly absent or inconsequential this week.  In that regard, next Wednesday's Retail Sales report is likely the most important data point followed by a smattering of other mid-tier reports in the 2nd half of the week.