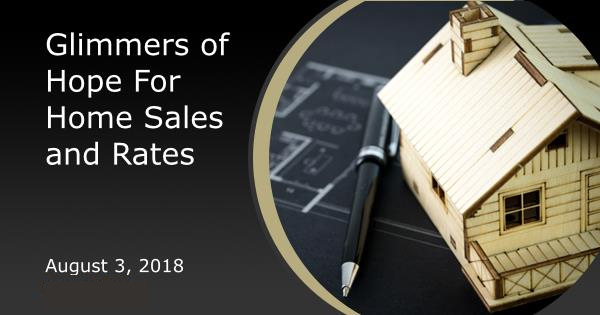 Glimmers of Hope For Home Sales and Rates

News has been pretty grim recently for interest rates and the housing market. This week's developments may provide a glimmer of hope.  Granted, it could turn out to be false hope, but for now, let's focus on the glimmer!

Freddie Mac reported a medium-big move higher in mortgage rates this week.  Freddie Mac was wrong.  Actually, to be fair, Freddie's methodology simply means their weekly mortgage rate update is a bit stale and can fail to account for some day-to-day movement.

The problem is that many major media outlets rely on that data to write their one big story on mortgage rates each week.  In defense of this process, their average audience member doesn't need to drill down on day-to-day moves, and Freddie's weekly rate is just fine when used as a long-term, general overview.

Is there a point here?

Yes.  The point is that you may have heard that mortgage rates moved higher this week, but in actuality they're about the same as they were last Friday.

You're sure Freddie is that far off?  I heard they said rates were 0.06% higher.

Consider this: Freddie's survey covers Mon-Wed, but Thu/Fri were our 2 best days this week.  Most of the discrepancy was erased on those 2 days.

Yes it is.  In fact, those gains helped rates challenge the recent trend channel.  Isn't that exciting?

It might be, if I knew what a trend channel was...

Sorry.  A "trend" in rates (or any other charted data) can be as simple as drawing a line that connects a few peaks or valleys.  If you connected peaks with one line, valleys with another, and if those two lines are parallel, you'd have a trend channel!

You're about to show me one, I bet.

2 of them actually...  One is the sideways trend that had been intact for nearly a month beginning in late June.  The other is the upwardly sloped trend that followed.

And that upward trend in rates is being "challenged" because rates have broken below the lower red line?

Yes!  But that challenge is just a glimmer of hope.  It's good to remember that everything is occurring inside a much larger trend where the peak and valley lines are converging or 'consolidating,' to use the market jargon.  That so-called consolidation trend represents 2018's true battle between higher and lower rates. 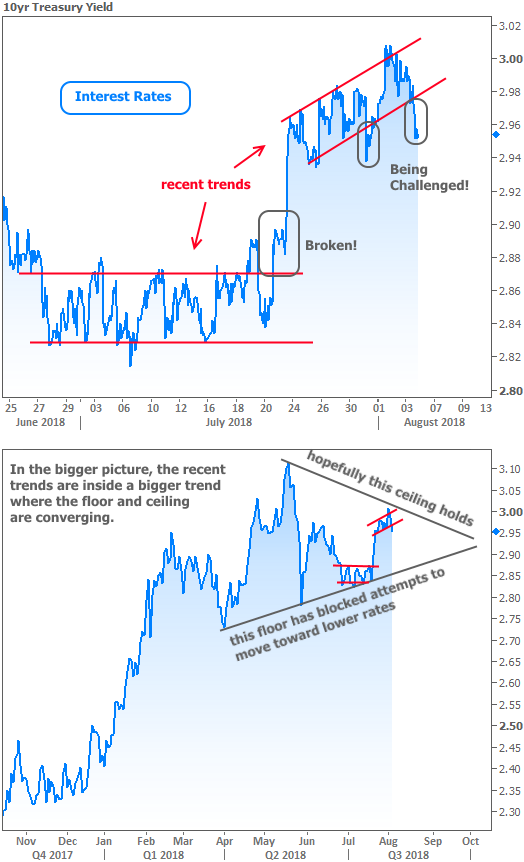 Who's going to win?

We all get to find out together, and much like the season finale of a twist-heavy TV series, none of the fan theories will be exactly right.  We can agree on a few things though.  One of them is that economic data will play a role.

Can we observe trends in that data?

Absolutely, and there are some that are worth considering in this week's biggest piece of data.  The Employment Situation (aka the "jobs report") is historically the most important report as far as interest rates are concerned.  The headliner of the report is NFP or "nonfarm payrolls," a simple tally of job creation.   According to the report, the economy added 157k jobs in July--well short of the 190k forecast.

Yes, that's generally true, but missing the consensus/forecast by 33k payrolls was offset, to some extent, by a positive revision to last month's NFP number (+35k).

So why did rates improve after NFP?

There are other parts of the Employment Situation that speak to rates.  Specifically, the report showed as-expected wage growth in July and a slight negative revision to June.  This kept year-over-year wage growth in check.

Why do we care about wages?

Rising wages are a viewed as a precursor to inflation.  If people are earning more, they can spend more.

Why do we care about inflation?

If dollars become worth less, bond investors who'd bought bonds with a fixed schedule of payments are suddenly receiving less value.  For example, if I buy a bond with a fixed return of $100/month, I could buy $100 worth of "stuff" today.  If inflation makes that "stuff" cost $150 in the future, I've lost a ton of purchasing power.  That's why investors demand higher rates of return when inflation is expected to rise.

Put that all together for me.

Experts thought wages would be rising faster because unemployment is super low.  Tepid wage growth allays investors' inflation fears, which, in turn means investors are more willing to buy bonds at current rates of return.  Higher demand for bonds means bond sellers can pay lower rates of return and still find buyers.  And the "rate of return on bonds" is an interchangeable term with "interest rates." 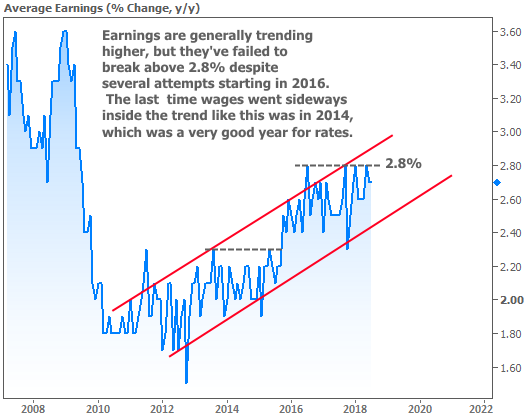 OK, maybe we should move on.  You said something about home sales and glimmers of hope?

Yes! As I alluded to last week, this week's Pending Home Sales release would provide the most up-to-date glimpse of home sales momentum.  It came out stronger than expected!

Great! So the housing market is back on track and everything's going to be just fine?

Well... Glimmers aren't guarantees.  We could just be looking at a random uptick in a series of data that is still trending sideways to slightly lower.  Pending Home Sales have arguably been doing that since early 2016.

Not hardly!  And I'll show you why with a chart that connects all of today's concepts: economic data, trends, correlations... it has everything!

I can hardly wait...

Ahem... Consider the following chart of Pending Home Sales versus rates.  While I didn't highlight it with its own line, your eye can probably pick out that 'sideways-to-slightly-lower' trend in sales that begins in early 2016.  That trend could continue, or it could simply settle sideways until the next big move.  Either way, Existing Home Sales are running at the highest annual pace we've ever seen outside the unsustainable housing boom.

Here's the point: home sales threw a big fit (relatively) the last time rates spiked to current levels.  This time around, sales aren't down nearly as much.  While this demonstration of resilience doesn't necessarily guarantee a big surge in home sales, it definitely suggests the housing market is NOT predisposed to any sort of crash unless a new and more significant threat shows up. 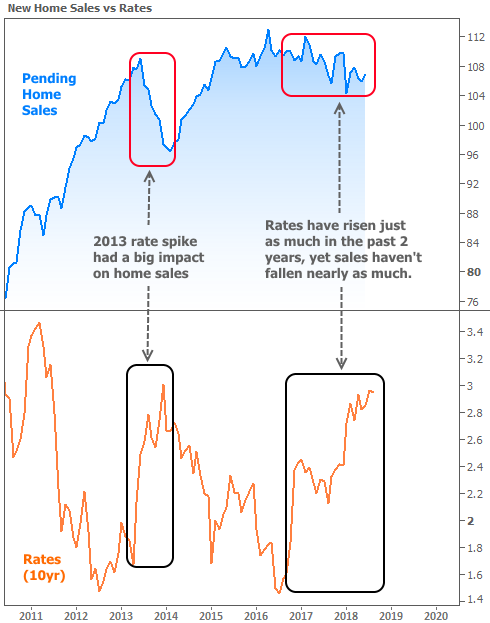