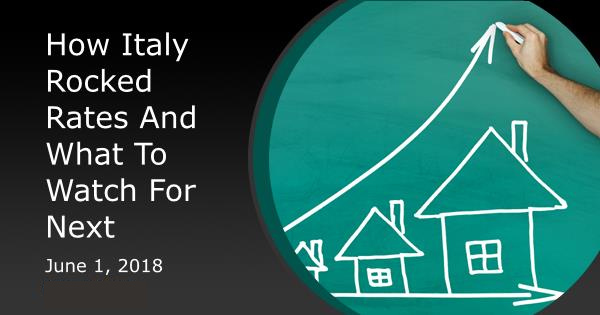 How Italy Rocked Rates And What To Watch For Next

Italian political drama already had an impressive impact on US interest rates last week. This week brought more surprises and even bigger reactions for better and worse (and in that order).

Last week's newsletter contains a fairly detailed discussion on the Italy effect.  It's worth revisiting if you have a moment.  If not, here's the gist: investors are concerned that the new political coalition in Italy will push the country toward a Brexit-style EU departure.  For financial markets, this creates several risks and a lot of uncertainty.  Investors respond by moving money into safer havens like the US bond market.  More demand for bonds = lower rates.

The holiday-shortened week began with developments in Italy that sent shockwaves through financial markets.  The Italian President (who vets government nominees despite a mostly ceremonial role) vetoed the nomination of Paolo Savona for the post of Finance Minister.  Savona is an outspoken critic of Italy's membership in the EU, and his nomination was a major concern for financial markets.

With Savona being blocked, it was fair to expect that rates would RISE.  After all, it's the fear of Italian politicians pushing the country out of the EU that helped rates fall in the first place.  Paradoxically, rates FELL sharply.

In Italy, if the majority party can't "form a government" (by filling positions with vetted nominees), a new election is the next step.  By vetoing Savona's nomination, the President ran the risk of sending Italy back to elections as early as July 29th.  Pundits agreed that any such election would turn into a Brexit-like battle over Italy's Euro membership and give the current coalition even more power.

Things changed on Wednesday with news that Italian politicians were trying to avoid sending the country back to elections.  By Thursday, the coalition nominated a new Finance Minister.  By Friday, he was confirmed by the President.  The defusing of political risk pushed interest rates quickly higher in the 2nd half of the week, ultimately taking us back to last Friday's levels.

The following chart shows how much more volatile this week was compared to the last (and how much Italian drama is required for a given amount of movement in US interest rates!).  The green line is the gap between Germany and Italy's 10yr government debt.  The lower it goes, the more skeptical investors are about Italy being able to repay that debt.  It's a direct reflection on the country's financial stability. 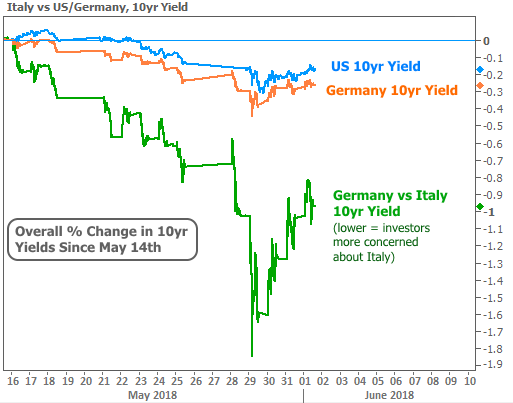 Focusing solely on rates in the US now, we can see Italy did us a big, temporary favor at the end of May.  With rates apparently on the way back up, next week could bring a showdown with a key inflection point.  This can be seen as 2.94% in the following chart of 10yr Treasury yields (the benchmark for longer-term rates like mortgages). 2.94% acted as a ceiling on the way up in February and then as a floor on the way down last month.  Whether rates bounce or break through, it would tell us a lot about how investors see the long-term rate outlook. 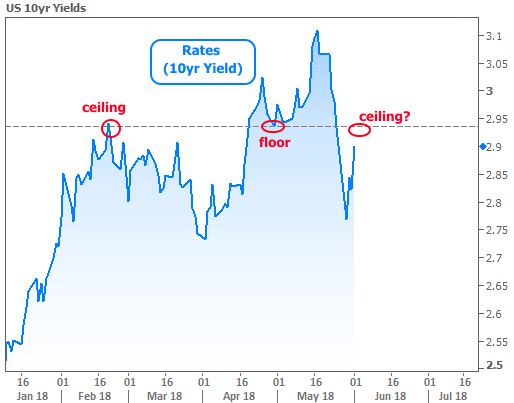 Rates were a consideration for this week's housing data.  The National Association of Realtors (NAR) released its Pending Home Sales report, which provides an early indication for the big Existing Home Sales report.  The NAR said the economy is very healthy, but that higher rates and gas prices are adding to the biggest headwind: supply, which Chief Economist Lawrence Yun referred to as "dire."

The headwinds likely account for the slight downtrend seen in the following chart.  Notably, sales are managing to hold respectably close to recent highs nonetheless. 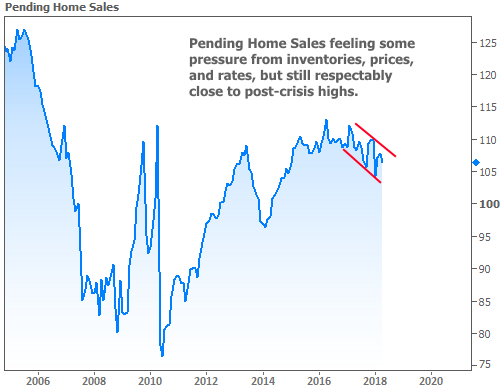