Do the President's tweets really move rates? Of course that's going to depend on what he says, so let's take a look at this week specifically. Tweets relating to missiles, Syria, and Putin played a central role in this week's market movement. At times, they seemed like the only way to explain interest rate volatility seen earlier in the week.

Before we continue, keep in mind that when we discuss "interest rate volatility" here, we do so with a microscope.  Mortgage rates, especially, have been in a very narrow range for several months following the scary spike at the beginning of the year.

The following chart is going to give away the answers to today's questions, so allow me to sneak in a few thoughts to preface it before you move on.  The top section contains only 10yr Treasury yields--the universal yard-stick for longer-term rates in the US (like mortgages).  The encircled portions correspond to Trump's Syria tweets.

If you didn't catch these tweets, the first one was a response to Russia's warning that it would shoot down any missiles fired at Syria.  In reference to said missiles, Trump tweeted "Get ready Russia, because they will be coming."  To some extent, financial markets saw this increasing the odds of armed conflict with Russia (new military conflicts are typically bad for stocks and good for bonds/rates).  The second tweet basically moderated the tone of the first, and was widely credited for sparking the biggest rate spike of the week.

The 2nd and 3rd panes of the chart put the Tweets into context and will be discussed below.

Long story short, bonds had a more volatile week than stocks on a relative basis (i.e. the blue line darts away from the orange line in the middle section of the chart, and then darts right back).  That volatility had just as much--if not more--to do with this week's Treasury auction process and the unexpected trades stemming from last-minute retirement account funding (due to the tax deadline).  The more we zoom out to the bigger picture, the more we see that tariff news trumps Trump's missile-related tweets.  But if we keep zooming out, even tariffs can be trumped.

Notice in the bottom section of the previous chart that there's a big spike lower in stocks that wasn't highlighted. That was the most recent 'flash crash,' and it continues to elude convenient explanations based on conventional cause and effect.  In other words, there were no obvious reasons, big news headlines, or major economic developments to blame.  It just sort of... happened.

Journalists, analysts, and even casual observers don't really like such serendipitous explanations, so you tend to see scapegoats like "high frequency trading" at the scene of flash crashy crimes.  But if you're willing to join me in a more philosophical, larger-scale realm of market motivations, consider the following chart: 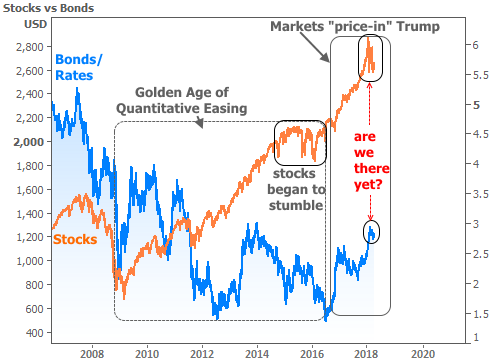 There's too much to responsibly discuss in a weekly newsletter when it comes to this chart, but I can give you the gist.  Simply put: times are changing in terms of central banks stimulating financial markets (the QE "golden age" refers to multiple central banks pumping unprecedented amounts of cash into the financial system).  On top of that, new fiscal policies are creating moving targets for stocks and rates.  All we know is that those targets are higher than they were in the middle of 2017.

As we get closer to those targets (wherever they might be!), bigger bounces like February's flash crash are the moments where whispers of "are we there yet" grow into shouts.  In February, those shouts were fleeting, but investors haven't quite relaxed.  They understandably want to see how trade war risks and a hotly-anticipated earnings season play out before forgetting about that inquisitive little outburst and getting back to business.

To whatever extent the crowd calms down (strong earnings and moderation of trade-war/geopolitical risks would help), the implication is that rates and stocks would both be more likely to continue higher in coming weeks.