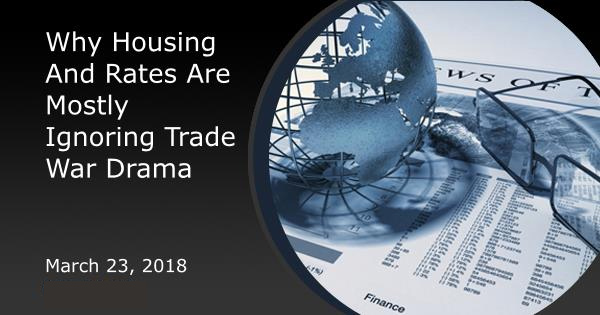 Why Housing And Rates Are Mostly Ignoring Trade War Drama

This week's most prevalent financial headlines focused on the risk of a global trade war as the White House took its first official steps toward raising tariffs on goods imported from China. Although the stock market seemed to care quite a bit, interest rates and housing data were relatively unfazed. Here's why:

Right off the bat, we can table the discussion on housing data.  This week's tariff news could't possibly have an effect on this week's housing data because the housing reports cover the months of January and February.  Even then, when we're talking about things like home prices and home sales, tariffs and trade wars wouldn't be at the top of a list of concerns.

In the event that tariffs are raised on goods used in home construction, there could be some effect on home prices and builder margins, but we'll cross that bridge if we come to it.  Even then, home sales numbers and home prices have been a shining beacon of stability in spite of headwinds.

Inventory has been one of the biggest headwinds--mainly for the existing homes market.  But this week's Existing Home Sales report showed a moderate improvement of 3.0% month-over-month, easily maintaining an annual pace well over 5 million units--something they've been able to do every month since November 2015. 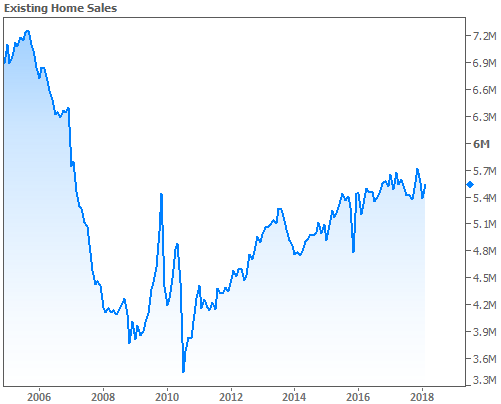 Supply has been far less of an issue for the New Homes market.  As such, this week's New Home Sales numbers were easily able to remain in their 6-year uptrend despite falling 0.6% from the previous month. 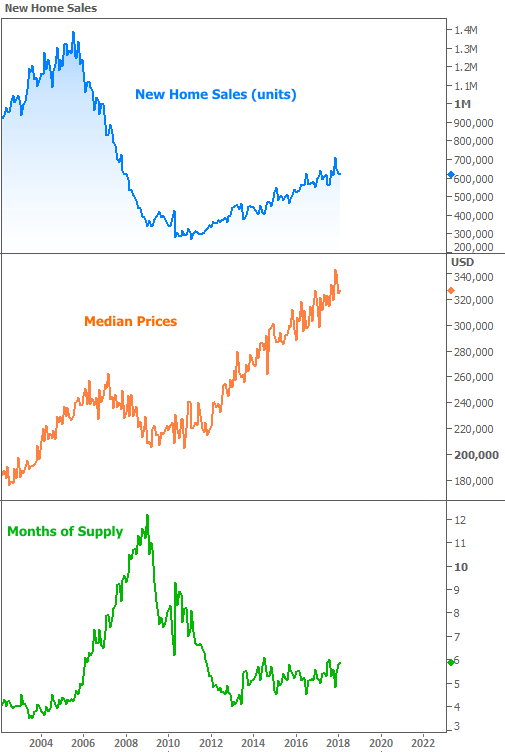 The most noticeable departure from recent norms was seen in FHFA's report on January's home prices.  Depending on the source, we've seen year-over-year home price appreciation running in the mid-to-upper 6% range.  Now, for the first time in more than 2 years, FHFA is reporting appreciation over 7%.  It was also the biggest month-over-month jump in more than 5 years.

With housing-related data not being timely enough to show any ill effects from the trade war narrative, let's take a look at some of the inputs for the housing market that can actually respond in real-time: interest rates and stock prices. 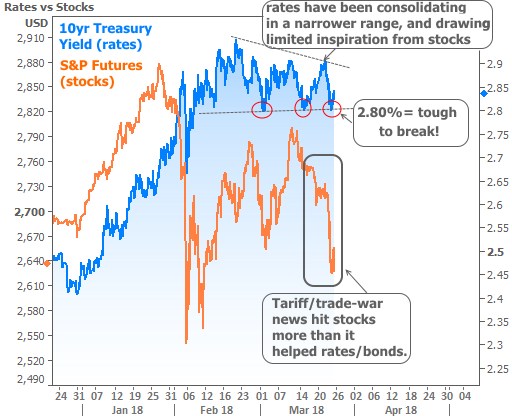 As the chart suggests, the trade war news hit stocks the hardest this week, and it didn't really hit bonds (rates) much at all.  I mention stocks as an input for housing only because a certain amount of stock market weakness can decrease the wealth effect for homebuyers who own stocks, thus having a potential effect on prices and sales.  This, too, is a bridge we'll cross if we come to it.  The current losses aren't quite big enough to open that discussion.

But rates always matter to those in the housing and mortgage markets.  Using 10yr Treasury yields as a proxy for all longer-term fixed rates (like mortgages!), we see a 3rd straight bounce at 2.80%.  At the same time, rates have been just as hesitant to go much higher than 2.90% recently.  This sort of consolidation begs the question: will the floor or ceiling give way first?

Even if we do see the 2.80% floor broken, rates will have a very hard time returning to levels seen in 2017 for reasons we've discussed at length in previous newsletters.  One of those reasons is the Federal Reserve's policy outlook.  In that regard, this week was potentially a big deal because it brought Jerome Powell's first press conference as Fed Chair as well as an update on the Fed's rate hike outlook--something we only get 4 times a year.

Bond traders were apprehensive ahead of Wednesday's Fed events.  They began to push rates higher late last week and that trend continued all the way through Wednesday afternoon.  The new rate hike outlook confirmed the Fed is now almost 50/50 on hiking rates 4 times this year instead of 3.  As such, the few moments following the release of that data saw this week's rates rise to their highest levels since late February--nearly matching 4-year highs.

Half an hour later, Powell began fielding reporters' questions and bond traders liked what they heard.  Here are a few key comments from Powell that helped:

As this week's final chart shows, there's a strong correlation between the market's Fed rate hike expectations and the real-time movement in benchmark lending rates (like the 10yr yield).  The top pane of the chart leaves no doubt that Powell's press conference was this week's biggest turning point. 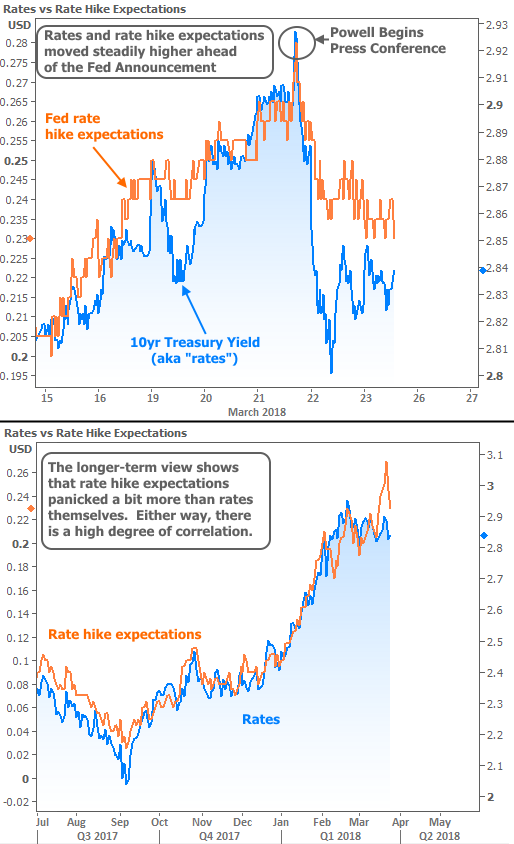 The bottom pane is food for thought.  It shows rate hike expectations breaking higher than 10yr yields.  And it's here that we're probably seeing some of the positive effects on rates from the negative stock/tariff news.  In other words, perhaps without the big stock losses and trade war concern, rates would have been more willing to move higher.