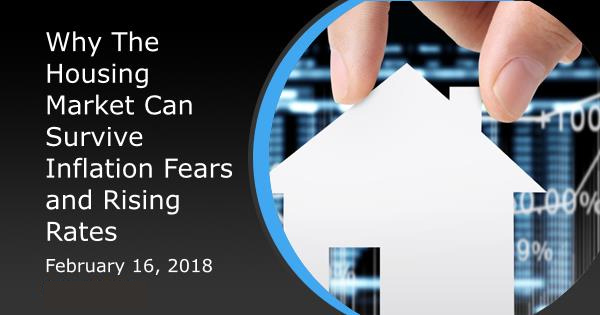 Why The Housing Market Can Survive Inflation Fears and Rising Rates

Inflation is widely accepted as an archenemy of interest rates.  This stands to reason, given that rising inflation means bond investors would be paid back with dollars that have less purchasing power.

To take that example to an extreme, imagine you lend me $100 and I'll pay you back 10 bucks a month for a year.  Great deal for you as you're earning $20 in interest!  You'd be pretty happy with that investment unless inflation surged.

Whereas your $120 might have been good for the better part of an Amazon Prime membership when you lent me the money, let's say rampant inflation resulted in Prime costing $300.  That elegant dinner for 2?  Sorry... now it's a relatively upscale dinner for one.  You get the idea.

As an investor, you would have to account for rising inflation by charging me a higher interest rate.  It's this exact mindset that is built into bond trading every minute of every day.  Bond markets (which dictate rates) are constantly adjusting based on inflation expectations.  There's just one problem: this extremely logical correlation between rates and inflation was almost completely broken for several years following the financial crisis.  Markets are currently trying to figure out just how scared they should be, not to mention just how legitimate the threat of rising inflation is.

As far as fear is concerned, today's market participants either lived through the 70's/80's or they learned from people who did.  Because of the following chart (and all of the carnage it implies) a fear of inflation is deeply entrenched in the bond market. 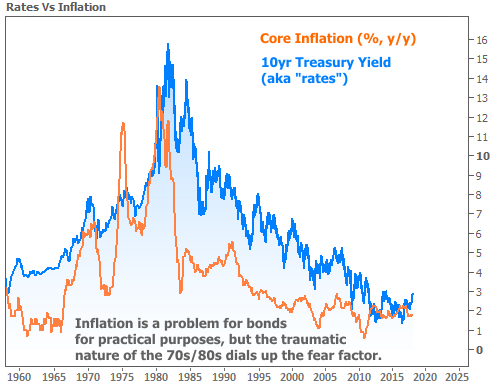 In the wake of the financial crisis, however, the traditional interplay between inflation and rates was suppressed by a combination of factors.  Some of those factors were arguably intangible (things like a "retrenchment mentality" following the abrupt wealth destruction associated with the mortgage meltdown).  This made it all the more challenging to make sense of inflation's relative lack of importance.  One glaring example is seen in the chart below in 2011. 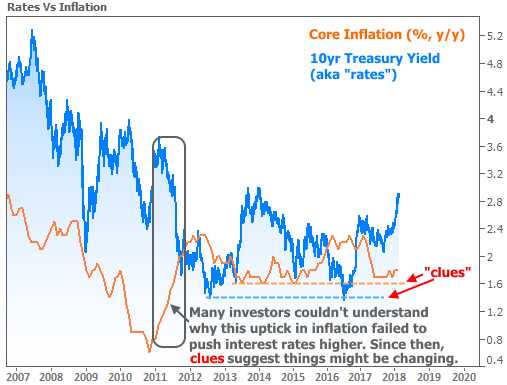 As the chart suggests, there have been a few clues about inflation taking root and rates taking notice.  Some investors point to the 1.6-1.7% floor in core inflation (orange dotted line) as a sort of base-camp for a move higher.  They figure this base-camp lines up with 2 big bounces at all-time lows in the 10yr Treasury yield (the most widely-followed benchmark for longer-term rates).  This thesis was also reinforced by the new administration's policy path, which many investors expect to contribute to inflation.

All of the above was enough to reignite inflation fears, but it hasn't been enough for actual inflation numbers to surge.  So we're in a situation where that old-school fear is waiting on the edge of its seat for justification to flourish.  With that in mind, wage inflation has been a hot topic of late.  In the jobs report earlier this month, news media latched onto the wage growth figures (even though month-over-month numbers were in line with forecasts), and suddenly everyone was talking about how wage inflation meant a surge in price inflation was right around the corner.

Here's the problem with that: wages actually are NOT doing so hot by the time we adjust for the effects of the existing levels of inflation.  In other words, real wage growth--the stuff that would speak to consumers' ability to push prices higher--has been falling.  On a month over-month (m/m) basis, it's in negative territory.  In year-over-year (y/y) terms, it's getting close. 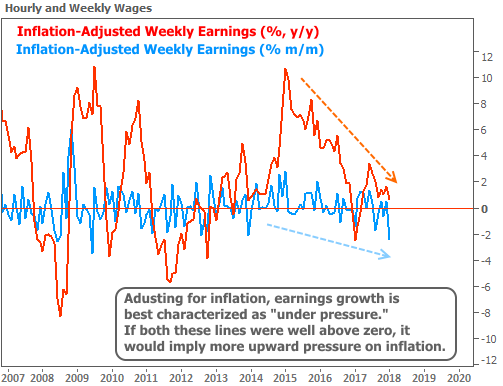 Compared to the news media, most investors aren't nearly as concerned about declines in real wage growth. They understand that, for the most part, inflation-adjusted wages simply tend to follow big moves in the the dollar, and that recent currency volatility is likely behind most of the move. 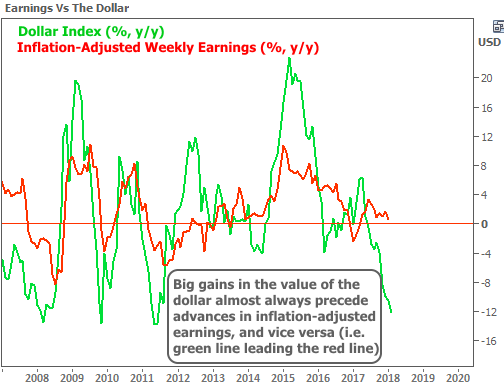 So what’s affecting the dollar?

The current market environment is more politically-charged than normal.  This has resulted in an increased focus on how the administration’s policies affect the dollar.  No one can know exactly how much weight to give the political scene, but there's a wide range of speculation--again, mostly in the news.

I’ll stop short of labeling the political concerns as a red herring.  They matter.  But currencies have bigger fish to fry and investors know it.  If the past 5 year have taught us anything, it's that foreign central bank policy matters more.  This is easily seen in the following chart which compares the annual rate of change in the Euro vs the Dollar (note: the Euro is inverted as to better show the correlation in movement.  In other words, the lower the orange line, the stronger the move in the Euro).  Bottom line, if US politics was tanking the dollar, the green line would be moving lower faster than the orange line. 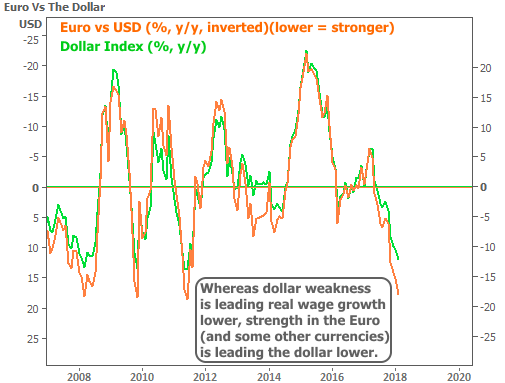 While the political angle might play better in the news, traders are well-aware of the realities that underpin inflation.  The bottom line here is that, although inflation concerns are playing a part in the recent rate spike, those concerns aren’t abject enough to deserve a majority of the credit.

Of infinitely greater concern to the bond market are the forces that will affect supply and demand in the coming months (and years).  On the supply side, existing and potential legislation promises to increase the amount of bonds issued by the government.  More issuance = higher rates.  At the same time, the Fed is in the process of buying fewer and fewer bonds.  Less demand from the Fed = higher rates.  Add to this the fact that foreign central banks are also beginning to step off the accelerator and we’re in for a tough road ahead.

To be fair, the road has already been quite tough for rates.  The average 30yr fixed mortgage rate spiked by more than half a point since the drama began in earnest at the beginning of the year.  But with all those headwinds, is this just the beginning of something even worse?

The following chart gives us an idea of a truly horrific rate spike.  The blue line plots the change in 10yr Treasury yields during the 2013 taper tantrum in absolute terms (i.e. the y-axis is the total amount of movement).  The orange line is the present-day rate spike on the same axis. 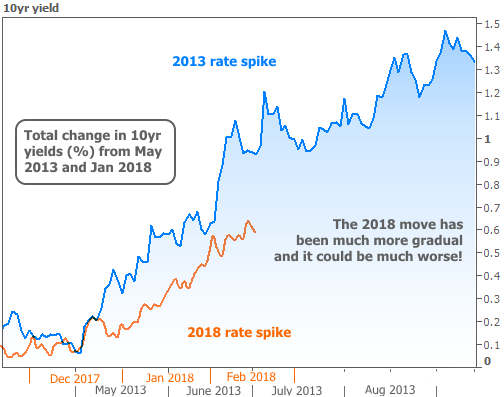 Clearly, 2013 was much worse, but there’s more to be gleaned.  On the negative side, the 2018 move has been far more gradual.  This suggests that rates know where they’re going and they don’t mind taking their time getting there.  In other words, this isn’t a panicked reaction to a new realization as much as it’s a gradual acceptance of new realities (the supply and demand stuff discussed above).

On a positive note, the absence of such a realization means we’re not likely to see the rate spike accelerate in the same traumatic way it did in 2013.  And that’s not even the best news—at least not for the housing market.

The best news concerns the housing-related fallout from these sorts of rate spikes.  This week brought strong housing reports with a surge in New Residential Construction numbers and builder confidence.  Rising rates might lead us to wonder if the good times will keep rolling.  While there’s no way to know exactly how things will pan out this time, we can at least highlight the 2013 taper tantrum in the chart of this week’s housing reports.  In so doing, we see the numbers barely missed a beat, even when things were much worse in terms of rates. 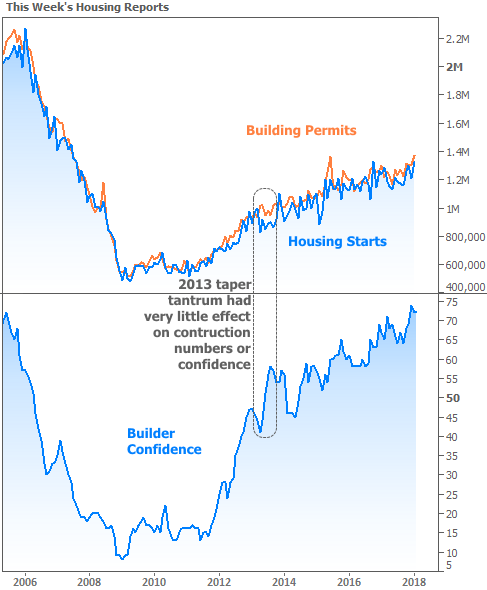